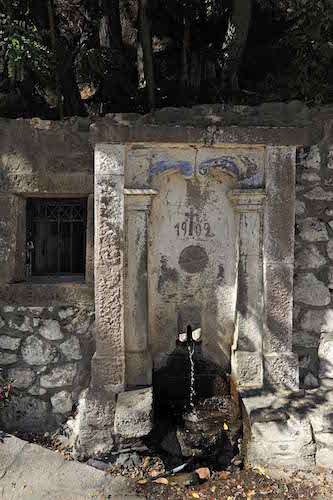 Last week there was a big fire on the island. It started at Megalo Limni. It took me some time to place this ‘Big Lake’: it is the vast lowland you pass if you are driving from the flats of Kaloni to the mountain town of Agiosos, just before the road that goes over the hills through Ambelika and Akrasi to Plomari. This used to be a large sweet water lake, fed by several streams coming off mount Olympos, and it provided Mytilini, the capital of Lesvos, with water.

The Romans preferred to live in cities and they took care they were fitted with all sorts of conveniences, especially baths, gardens, swimming pools, and sewerage systems, all of which needed water. According to archaeological findings, several aqueducts delivered water to the ancient city of Rome. In about two centuries BC the Romans were still enlarging their Empire and conquered the Greek states, and began impressive public building schemes with water towers, sewers, drainage-canals and aqueducts.

They built about 200 aqueducts in their new domains, and in Greece the best known were in Athens, Corinth, Nikopolis (Northwest Greece) and on Lesvos. The Aqueduct of Moria — called the aqueduct of Lesvos now — was built around 200 AC. It is said that it used to be 22 kilometers long: from Megalo Limni all the way to Mytilini. The biggest part that still stands (and was recently restored) is a little outside Moria, a few kilometers from the capital. It is 170 meters long and has 17 arches. Close to Lambou Mili you will find another part of the aqueduct, with its old arches spanning a river, but out of the way, lonely and forgotten.

After the Romans left (only a century later) some time during the passing years, these structures fell into decay and Mtyilini had to get its water in other ways. In 1935 the Megalo Limni lake was drained to make way for farm land.

In other parts of the island the inhabitants usually found their water from springs on the slopes of the biggest mountains of the island — Olympos and Lepetimnos. These mountains secrete so much water that even in the heat of high summer natural springs just keep on flowing.

In most parts of the island tap water is drinkable, but it still contains additives put in it by municipal authorities for public health. That is why a lot of people buy mineral water in the shops. But why would you buy bottles of water when you live on an island that has so many natural sources?

On a really hot Sunday we made a water tour of the natural springs of Lesvos to compare the taste of different sources. We started from Molyvos and progressed through Favios, Sykaminia, Mandamados, Agia Paraskevi, Lambou Mili, Agios Dimitrios and Vasilka towards Lisvori. In order not to collapse in the heat before we reached Karini, the area of the island richest with springs, we by-passed the popular spring between Petra and Kaloni, the beautiful spring of Ypsilometopo, and the famous water source at Lambou Mili along the main road to Mytilini.

Tasting water is a job. Nothing is as difficult as describing it accurately. So we came up with our own descriptions: funny taste, bitter, even, no aroma, rich, fresh, sweet, chemical, soft, no after-taste, round, fruity, bad taste, acid. At most springs we met people filling large water containers and they all said theirs was the best water on the island. Everyone to his taste. (TB: It’s often said that once you drink the water of Lesbos you are bound to return.)

The two most famous springs on the island are in our top three: Lambou Mili — where you take the road towards Karini, after the bridge — and Agios Dimitrios, a small hamlet with two tavernas, famous for its Gliko Koutaliou (sweet from the spoon — vegetables and fruit preserved with sugar). The funny thing was that the water from the most popular spring, just down from the hamlet, had an acid first taste and was not sweet at all, in contrast to the water from the spring up from the hamlet, towards to Vasilika, which was really soft and sweet and, for us, the best.

The biggest surprise however was the water from Sykaminia, at the church just before the mountain village (if you are coming from Argenos). This water is rich, fresh and sweet and we thought the best of all we tasted. The only disadvantage is that the flow from the tap is so slow it takes ages to fill a big bottle.

In the North, South and Centre of the island you will never be in danger of death from thirst. Somewhere there’s always some refreshing water. Our tour was excellent, especially as it was on a very warm day. Although I rarely felt so happy taking my first swig of ouzo, after we had a second taste of all the water we collected from the different springs.

And by the way, the fire at Megalo Limni was fought with big water bombers which came amongst others from other islands. It crossed the road towards the pine forests and a strong wind made the situation very dangerous. With knowledge and resources, however the fire-fighters knew how to prevent a real catastrophe and only a few hectares of wood went up in flames. Thanks to its ample water supplies, Lesvos got off again.