The Battle of Bottles 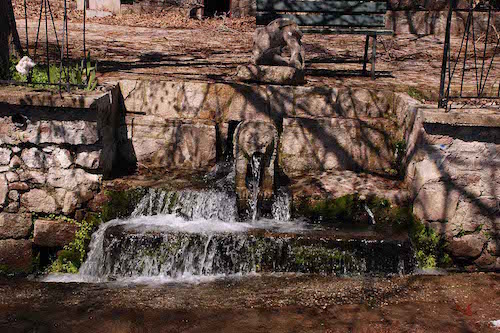 Humans have always carried water. In ancient times it was in braided baskets or animal skins, and then there were bottles. In 1622 the first bottles with water were sold commercially. That was at the Holy Well in England, because it contained so many minerals that it was thought to have medicinal properties. This is when we started to drink water from bottles.

Mister Schweppes added some carbonic acid, and so began water with bubbles. About a century ago bottled water still was a luxury. In 1970 the first drinks began to pour into plastic bottles, alsowater. This was the explosion in the use of plastic bottles and bottled water. Now bottled water seems to be a primary need in life. First mineral water was seen as a medicine and you’d drink it to get well; then it was seen as healthy and you should drink it to keep healthy and now most people drink it because they have been fooled by the water industries that speak badly of tap water, so now we have all turned into plastic-water-bottle-junkies.

Lesvos is an island that floats on a subterranean network of rivers and lakes with sweet water. You can still admire the grandeur of the now dilapidated, but once luxurious spa hotel from the beginning of the twentieth century, the Starlitza in Thermi. In those days people came to Lesvos to enjoy its spa’s. Nowadays only a few people come for the hot springs, and they don’t even know that Lesvos also has many cold water springs, that produce water rich with minerals, just like the Holy Well in England. Except for my own bottles that I fill with spring water, I have never seen a bottle with Lesvorian spring water. What I have seen are lots of, mostly old, Greeks who patiently fill bottles at the springs, even though their numbers have decreased rapidly. That may be because the quality of tap water these days is good, but I presume it is more likely because people have become lazy: it is easier to buy a bottle at the store. Old people still may believe in the medicinal properties of mineral water while the young are more seduced by the consumer dictators, who make big business out of bottled water.

I haven’t seen any scientific reports on the spring water on Lesvos, but years ago I went for a tour around the island, to taste the water of a lot of springs. The journey wentthrough Vafios, Sykaminia, Mandamados, Agia Paraskevi and Agios Dimitrios (the hamlet with the most and tastiest springs) to Karini, where there is always water and loud quacking ducks. It is surprising how many different flavors of water there are: bitter, a small bouquet, full, sweet, soft, round, fruity or no taste at all (see: Empire of water).

The invention of plastic was a big event in our history, along with the advent of indestructible plastic bottles. Now they have become a plague. They are like an aggressive vegetable invader not to be stopped. Though you can do lots more with a plastic bottle then drink from it. You can build glass houses with them, fill them with sand and build walls, construct houses, refugee camps and even boats or whole islands. The sad story is that people thoughtlessly throw them away into nature or the garbage. We have plasticized our planet so thoroughly that when the time finally comes that a little plant can be made to survive on the moon – we will have to move there, becausePlastic Planet Earth will be a planet where life will no longer be possible.

Until that time we have to make-do with how the earth is now and make the best out of it. Various countries have already started banning plastic bags. I hope soon those bans will also include plastic bottles with all their caps that hide everywhere.

Lesvos should noted more as an island rich with medicinal water, not only to drink but also to bath in. Instead one after another hot spring is being closed. Years ago the always welcoming hot spring in Lisvori was closed after some improvements went wrong, some months ago the hot water spring of Polichnitos was closed and recently Filippos, who with his wife managed the spring at Eftalou has died: what will become of that popular one? Only the spring at Gera remains. Therma Spa Mytilini it now is called, after it has been so modernized that it has become one of ‘the places to be’ on the island, with a lounge place overlooking the Bay of Gera.

Cold water springs are a lot more difficult to close. The municipality should have all springs analyzed and then have a publicity company promote the medicinal and tasty mineral water of Lesvos, that with only some effort to get, doesn’t cost a dime. It is a shame that on the island so many plastic bottles water are sold when there are so many springs that keep on spewing healthy water. Even if you really do not trust spring or tap water, you can always buy a water filter: get away from plastic bottles and their nasty caps!