The B of olives 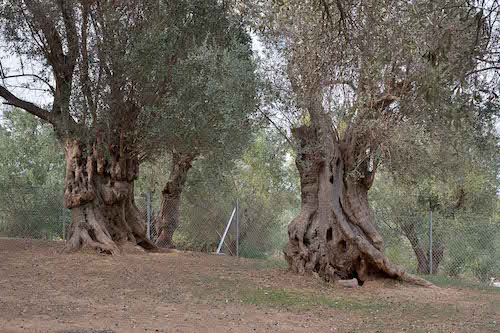 The sun keeps on shining relentlessly. Sometimes clouds roam through space, aimless bundles of wool that, even whilst made of hydrogen, offer not one drop of water to the island. In shadowy corners where some humidity gathers, a dazed mushroom lifts its head upwards and considers this strange world. Only a few specimens dare to come up. It’s as if even mushrooms need permission to come out in this second lockdown.

In Greece you are only allowed to leave your house with a signed note or a SMS; there are 6 reasons for going out: B1 to B6. Going for a walk with the dog is B6, as is some exercises outdoors, not too far from home. There is however no number for mushroom gatherers. Even though you could say that nature should be categorized like any supermarket, providing necessary products not available elsewhere: B2 (necessary shopping). Mushrooms, chestnuts and strawberries from the strawberry tree Arbutus onedo form a super healthy diet, helping you survive this awful corona.

Picking olives is permitted: that is registered work. The tick-tacking of poles striking the olive trees is one of the sounds soaring into the sky these beautiful days. Farmers have a special permit without B-numbers to work their fields and to go to he cooperative. However in years past you would hear the splatter of laughing and the chattering of harvesters, this year there is no olive concert in the air. Even though some people will have secretly gone to the olive groves to catch the liquid into the nets. This year the small olive harvests on Lesvos are mainly done with the help of friends and family, earning at least some bottles of the much appreciated oil. But there is no number for helping harvesting. Or should it be under B4: a needy person.

On Lesvos there will be not too many needy farmers. Many of them have already seen their olive harvest perish, because a heat wave in May ensured that many olive flower buds didn’t develop as they should, leaving many trees empty. Lesvos also doesn’t have many migrant workers anymore: since the crisis every olive owner is back in the fields himself. Even though the island is full of olive groves, large scale farmers who rely on plenty of workers to get their products gathered are nearly non-existent on the island. In contrast, on the mainland and countries like Spain and Italy, due to corona no workers coming from foreign countries can travel and the landlords are without their army of helpers.

It looks like the second lockdown is taken seriously this time. The island has a pretty high number of corona patients and the population feels the virus sneaking closer and closer. Even outdoors in nature masks are worn; maybe covid drops nestle into the trees and just like those sneaky ticks let themselves drop when you are passing by.

Someone in a local paper even dared to declare that the olive harvest is the cause of the increase in corona-cases on Lesvos — as if olives are disease spreaders. During this pandemic many people believe the weirdest theories and who knows — some are now even afraid to enter an olive grove.

Another factor affecting the growing of olives is the climate. According to Michalis Veloutsos (agricultural association of Pètra) olive farmers have plenty of problems on the island because the climate tends to be shifting to a tropical one: hot days, humid nights: making it much easier for the dakos fly (olive enemy number 1) to live and create havoc.

I had the feeling that the climate of the island was cooling down – rather than warming up. But when Lesvos indeed gets more tropical temperatures, could it be that the dakos can get as destructive as once was the insect phylloxera, that at the end of the 19th century drove all bushes in the vineyards to Hades? After the disappearing of the famous Lesvos wines, olive oil became one of the major products of the island.

Corona marches on as an insect plague over the world. We will overcome this virus, but for that to happen we will have to give up something: our arrogance in believing that nature will keep on accepting everything people continue destroying.