Sunglasses with a story 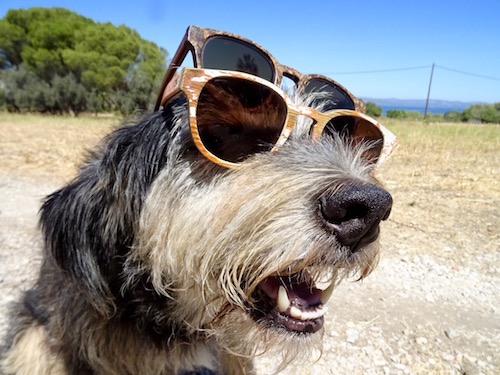 Hundreds of islands are anchored in the Aegean Sea, their mountaintops bare as in the Cyclades, but green tops on the islands in the north. Greece not only has sun and beaches to offer, it also has vast forests: magical shady worlds with secret water sources and rare flowers. Millions of years ago Lesvos was covered with towering Sequoias swinging in the wind; now it’s mostly whispering pine forests, some lost rustling oak trees, here and there a tuft of proud chestnut forest and there where the water looks for a way down, you may find very old mysterious plane trees.

It was the pine trees that were used in shipbuilding, their resin to make the vessels waterproof. Greece was a sailing nation and even the gods had a say in shipping. The adventures of Odysseus are legendary. On his way home, after the Trojan war, he gouged out the sole eye of Polyphemos, son of Poseidon. As revenge Odysseus and his crew had to dwell for years on the vast Aegean sea, where on each island another risky adventure awaited them.

Ships remained important for Greece: armies departed to battles on hundreds of boats, propelled by thousands of rowers to the areas of conflict. In 406 BC the sea battle of Mytilini was fought by 70 ships from Athens and 170 ships from Sparta: this important battle was won by the Spartans. On May 27 1821 there was the sea battle of Eresos, where a huge Turkish warship was set on fire by the Greek fisherman Dimitrios Papanikolis with a so-called fire-boat, resulting in a Greek victory, giving the Greek fleet wings to continue their war of liberation against the Ottomans. Then they fought for island empires, nowadays it is the gas and oil fields that causes international fleets to come to the Greek seas.

Pirates, fishermen, travellers, warriors and merchants: they all congregated on the sea. It must have been heavy traffic with all those wooden ships, rowed over the waves by broad shouldered sweaty men or by sails powered by the wind. Most islands had their own shipyards and ship builders, the craft passed on from father to son. The 19th century and the industrial revolution brought many bigger ships, driven by steam with their hulls plated with iron. This was the time that the Greek shipping magnates earned their first millions. I wonder if Aristotle Onassis ever had a wooden ship in his mighty fleet. The wooden boats (kayikis) have carried on as the norm for the fishermen who were not trading in millions, but who managed to make a simple living, until today.

Nowadays, when sitting in a little harbour, looking out over a colourful fleet of fishing boats and an occasional pleasure ship, you will see that the wooden vessels are a minority. To fight overfishing the European Union offers a seductive subsidy to fishermen who surrender their license and destroy their little boats, even that (in my opinion) the castle-big ships and their enormous all-destroying nets are to blame for emptying the seas. You can call it a crime that in this way the remains of a rich and centuries long history is reduced to rubble. It is the end of not only the wooden boats, but also of their builders.

It’s fortuitous that photographer and filmmaker Tzeli Hadjidimitriou still managed to find two traditional ship builders, and has been able to preserve some of their craftsmanship on celluloid at least: Salt and Bread, three little stories of Lesvos, and Crooked Wood, about a traditional shipbuilder on Rhodes.

Syros is a fancy little island also known for its shipyard, but this is a huge one for very big ships, no wood involved anymore: Neorion. However, for me Syros has become the island of wooden sunglasses. Eleni Vakondiou and Periklis Therrios transferred their love for the sea and their Greek island life with its nautical history into fancy crafted sunglasses, made by their business called Zylo Eyewear: wooden glasses with a story. They mingle chestnut with seaweed (Sea Grass Collection) and play with old wine barrels (Nohma Collection). As children of a fishermanfamily they of course cannot resist the old wooden boats which offer plenty of wood for the glasses’ frames (The Fisher Boat Project). After buying a pair of seaweed sunglasses, I fell in love with their Fisher Boat glasses and had a pair of them made from the ‘Mastro Tasos’ boat Maria L.S. 840 (built by Zorzos Ioannis in 1973, with resin rich pine from Samos). Of course it is just a sliver of a small trechantiri (traditional Greek fishing boat), but it feels good to be wearing a piece of history on your nose. A small tribute to those lovely boats, that have become part of a dying culture thanks to the European Union.