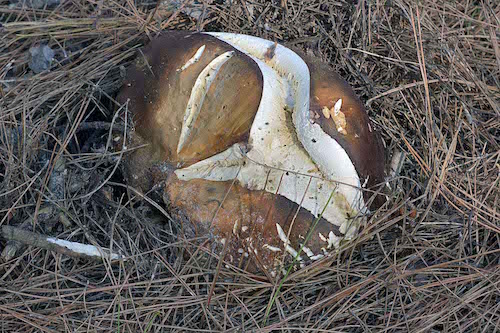 There once was a time when it was believed that mushrooms traveled with lightning. This explained how they could appear so suddenly. We still believe that mushrooms shoot out of the ground after a good rain shower.

However I no longer believe that. With the exception of a bit of rain during a bad week at the end of September; day after day the sky has remained super blue. The clouds have continued to avoid the island, as has the rain that from time to time could be observed above Turkey, but it has never dared to cross the Aegean and relieve the dehydrated land over here.

Last week, when I went with friends to the pine forest above Anemotia, we immediately saw that a herd of mushroom pickers had passed through the wood. Wherever we looked there were the remains of rejected mushrooms. So, even though during the past months there had been only one teeny-tiny shower, the forest seemed, surprisingly, to have been full of mushrooms.

We were frustrated by the broad track the destroying mushroom raiders had made the day before, so we became very focussed in finding what was left. The resulting finds were some forgotten aspros (Russula delica) and pèperites (Lactarius piperatus), dried out boletus, perished milk caps, grey mushrooms and other mysterious kinds. I also discovered a dark brown ball, already taken out of the earth. It looked like a porcini, the king of boletus, rolled up, anxiously, like a hedgehog. Nearby we discovered two similar balls, only this time as big as footballs: burst because of their explosive size and unnatural form. They did look like porcini disguised as giant puffballs.

We left those strange balls in the wood, only took the small one to research it back at home. We also took the mysterious triplet with suede caps, just like the orange-yellow Caesar’s mushroom (Amanita Caesarea); those mushroom freaks had forgotten the most delicious one there is to eat.

The ancient Greeks ate mushrooms, but I guess they were not fond of them. They mistrusted them and thought it strange that they sprang so quickly out of the earth and had no seed. Maybe the story was true that they traveled with lightning: that is why they were also called sons of Zeus, the god of thunder and lightning.

In ancient times people died from eating poisonous mushrooms. Nowadays the Greeks are still careful about eating them. I only know a few Greeks who eat more than two kinds of mushrooms. I must admit I am a bit the same. I love searching for mushrooms and identifying them, but eating all of them: no way! Most of them are not tasty at all.

When we arrived at our secret spot, it seems we came too late. Not because of mushroom hunters, but because of the time: most boletus had already perished. But we did find an enormous colourful dotted stem bolete (Boletus erythropus), diverse mysterious clusters of yellow-white mushrooms, small shiny pearl grey mushrooms and more milk caps — a mushroom Walhalla! There was even a green amanita with white dots, the brother of the fairy-tale-red-dotted-fly-amanita.

It is believed that during the Eleusinian Mystery Parties, where club members were confronted with violent visions, and during the heady celebrations of Dionysus, where the Maenads were brought to demented deeds, there must have been mushrooms circulating. Similarly with the priestesses of the Oracle of Delphi, who transmitted the words of the gods whilst in trances. That could have been due to gasses they inhaled, but some scientists thought that they were just tripping women, that chewed on a white dotted fly amanita, pretending to be the messengers from heaven.

The Romans liked mushrooms more than the Greeks and became huge consumers, meaning: only the upper class. There were times that as a poor citizen you were not allowed to even touch a mushroom! The Romans also became skilled in killing each other and it was not rare for a murder case to involve mushrooms.

I agree with the ancient Greeks that mushrooms are strange beings. It is a miracle that only with humid air they can grow into such big creations — in such fascinating forms. Maybe those giant porcini puffballs were a new kind: Soccer boletus. Too big for squirrels to play with (in Dutch those porcini are called Squirrel bread), but big enough for the boars who have come back to Agiasos and, who knows, possibly now also returned to the woods above Anemotia.

The suede triplet appeared to be a rare Velvet roll-rim (Tapinella atrotomentosa), edible but without taste. The small ball cut in halves was indeed a porcini: easy to dry and delicious to cook with. Now I regret that I left those other two Soccer boletus in the wood. It would have been kilo’s of first class porcini.