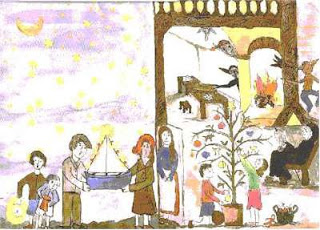 Saint Nicholas doesn’t have his birthday on the 6th of December! Because that is the date he died around the year 350! He was born in Patara, which was once a Greek village in Lycia and is nowadays a village in the south of Turkey. He was orphaned at an early age, but went on to become a bishop: the Bishop of Myra. He was such a good man that his deeds were renowned internationally. Within a century after his death he was proclaimed a saint. Then his fame just increased and the stories of his wonderful powers grew ever bigger.

Saint Nicholas was good to children and there are many stories about him saving children from starvation. In the West of Europe Saint Nicholas is the patron saint of children. The country where he is most revered is Holland, where on the 5th of December his ‘birthday’ is celebrated with a night full of presents. Children especially, who really do believe that Saint Nicholas comes from Spain to bring them presents, are spoiled that night with toys and candy.

In Greece however Saint Nicholas is the patron saint of sailors. When during his life he had to travel over sea and survived unbelievable storms, the sailors knew it was because of his prayer. So Saint Nicholas comes ashore on his Name Day of the 6th of December, soaking wet and with torn clothes, because he had to save so many ships out at sea. Many a Greek church in a harbour is dedicated to him. During Christmas, on some of the islands they decorate a tiny ship instead of a Christmas tree, in honour of the seamen’s patron.

But who is Father Christmas? Father Christmas has more in common with Saint Nicholas than you might realize. They both have the same white beard. One rides a white horse, the other rides a sleigh pulled by reindeers.

But Santa Claus, the more popular name for Father Christmas, is the same person as Saint Nicholas! It was even the Dutch who created him. The first official inhabitants of New York, which was originally named New Amsterdam, were Dutch settlers who brought with them their Saint Nicholas traditions. The Dutch name Sinterklaas soon became Santa Claus as an extra attraction during the Christmas season.

Greek children do not have a Saint Nicholas or a Santa Claus to bring them presents. They have to wait for the 1st of January in order to open gifts given to them by Agios Vasilis. This Holy Man has things in common with Saint Nicholas. They lived in the same century, in Greece, they were known for their good deeds and they both gave presents. But he was definitely another person, named after the archbishop Ceasara of Cappadocia, who is known as one of the founders of the Greek Orthodox church.

In December in Holland and America, as in many other countries where they know Saint Nicholas and Santa Claus, children gather around the chimney, waiting for their presents to come. Greek children however had better stay away from the chimney during these days. Because on Christmas Eve no parcels fall down the chimney, but Kallikantzaris. These are some kind of nasty fairy tale gnomes who come during the Christmas period, which is 12 days in Greece, from Christmas Eve until the 6th of January. They come to upset you by doing things like putting out the fire, dancing on your back or pissing in Christmas dishes which are not well covered.

It is believed that they live in the middle of the earth where they try to saw the tree that bears the globe. They nearly finish this evil work just before Christmas. But then Jesus is born and the tree starts to grow again. So those little bastards come upstairs to play havoc with the people.< You'd better not be born on the 25th of December, because then you will turn into a little monster. The only thing a mother can do to protect her baby is to cover the child in garlic or straw. (That might be why the little Jesus lies in a crib with straw!). Another way is to take off all your nails, because without nails you cannot become a Kallikantzari. There are different ways to protect your household against the Kallikantzaris. You can hang the lower jaw of a pig in the chimney or on your front door. Or you can throw an old shoe into the fire, so that these little gnomes flee because of the stink. But you can also try to keep the fire going all 12 days, so that they cannot enter through the chimney. Celebrating Christmas in Greece is quite risky.I wish you all a merry Christmas!