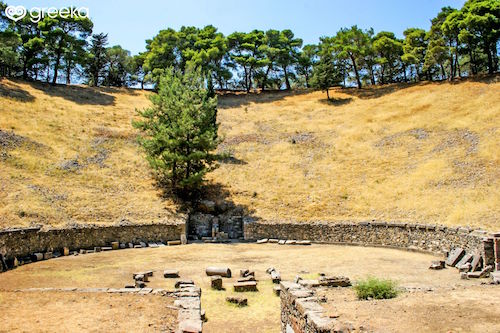 A few weeks ago a very old temple was found in an even older amphitheater in Mytilini: a temple for Nemesis, the Greek goddess of retribution. With a whip and a sword this daughter of gods stands for just punishments. She was also the patron saint of gladiators. The theatre in Mytilini was built by the Greeks a few centuries BC (unknown exactly when). In 88 BC the Romans conquered Lesvos and, keen on building as they were, they changed the theater by adding an arena and, a now discovered, a temple.

The ancient Greeks liked sports and culture. They organized the Panhellenic Games, and later the Olympic Games in Olympus. In those times a theatre was like Netflix now, where you could see the newest plays. A more serious amusement was to go to court, where, when the judges didn’t know what to do, the public voted for or against a conviction.

The Romans had theater and horse races to entertain the people. Funeral rituals for the rich and famous turned into a new sport: the games of slaves who fought against each other until death on the graveyard, were transferred to amphitheaters and slaves transformed into popular gladiators who fought each other with swords and indian clubs until only one survived. These sturdy showdowns became daylong programmes of entertainment, starting with venatores, where exotic wild animals torn each other into pieces, followed by bestiarii, where people and raging animals were to murder each other and ending with gladiator fights. The Spanish bull fights are wimpish compared to those cruel games.

The German Judith Schalansky, in her short story collection An inventory of losses, writes not only about the lost poems of Sappho, but also of a horrible fight between a Caspian tiger (now extinct) and a lion during one of those crazy shows in a Roman arena. It is difficult to imagine that god- loving Greeks liked these bloody scenes. The Greek theater in Mytilini had to be adjusted to this Roman entertainment: a wall was built around the theater stage. You did not want to have those wild animals or desperate gladiators jumping into the public area. And of course there had to be a temple for the goddess of gladiators, so that they could make a quick prayer for a victory before they entered the stage for possibly their last fight.

The island had a not bad life when part of the Roman Empire. It was popular amongst Roman tourists. In those times there was no coronavirus, but angry pirates roamed the seas. So a sea trip to the green paradise island of Lesvos was not without dangers. The Roman militarist and politician Pompey the Great swore to get rid of those wild corsairs of the sea and had most of them turned to a more peacefull life in three months. In those times Lesvos was a haven for pirates and it is not certain whether Pompey came to Lesvos in order to ensure the pirates kept the deal or that he simply came to rest under the shadowy trees and to enjoy the beautiful women of Mytilini. But for sure he was so impressed by the theatre in Mytilini, that returning to Rome he had a huge stone theatre built. In those times the Roman theaters were built with wood and dismantled after the performances. The Theatre of Pompey became the first permanent theatre in Rome and the biggest of the Roman Empire.

So the amphitheater of Mytilini, once the biggest in the mediterranean area, became the prototype for all Roman theaters. Once offering place to 10,000 visitors, with seats of marble and a marble throne for the priest of Apollo (the throne of Potamos), many centuries later it is totally deserted. Crickets and other insects twitter on the green slopes around the arena, no traces left of the seats, the lost marbles long ago reused in other buildings in the city. Birds are having the loudest songs. About the only thing you will find now might be some archaeologists who dig into the earth to discover the secret of the temple of Nemesis. Now that the coronavirus has conquered the entire world, the island is like the theater: without visitors or a summer program, awaiting what history has to say this time.