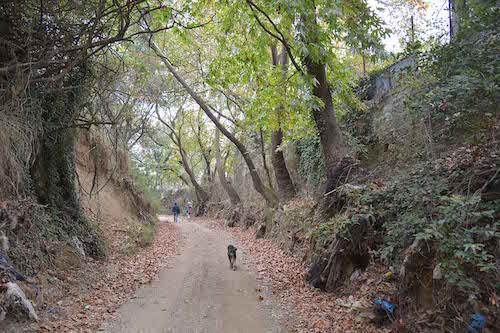 Lesvos is an island with water aplenty. Surrounded by the Aegean sea, it is fed by hot and cold springs and when it’s winter mode, in the dark months of the year, it is also blessed with water from heaven.

Several rivers stream through the mountainous landscape of Lesvos, carrying especially in the winte, rainwater to the sea. In the river deltas there are vast agricultural areas that profit from this water. Very Lesvorian: there are hardly any large fields. There are mostly small plots of land, worked on by farmers for their own profit. Walks through these gardens are more than idyllic: they parade fruit trees, amongst them very old olives, vegetables, flowers and cozy little homes.

For the municipality waterways mean headaches. Some locations are regularly badly surprised by masses of rain that no drain can handle. Landslides and constipated rivers have more than once caused little catastrophes. Kalloni, built upon a river whose channel runs nearly invisibly through the little town, more than once ended up with its feet in the water. Also Agiasos, though high in the mountains, once was surprised with so much water that several churches and the theater were flooded.

The road along the Sedoundas river towards Plomari has one of the most beautiful descents. In the mountains the show is the play of light and shadows on the olive groves together with the sight of the sturdy antique plane trees that keep watch in and along the river and a lost water mill. The closer your approach to Plomari, the more the gardens contain vegetables and dilapidated houses and sheds. The river dives straight into the beautiful town, where itsconcrete channelheads,along stately houses, towards the sea. In the summer the channel is used as a road and a parking place.

In Eftalou, betweena handful of hotels along the beach, a little street goesinland andis impassable for pedestrians during a great part of the winter because of a stream of water. It is not a big river, but one that each winter floods the boulevard and sometimes is so wild that even with high rubber boots, you cannot cross. In the summer it is lovely to have a stroll along that little street, until the concrete crumbles into the actual bottom of the river. The high banks are covered with herbs, bushes and trees and form a delicious shadowy world.

The most famous river-channel-street is in Kampos, close to Gavathas, where a river meanders between flourishing gardens towards the sea. Also here the bottom is concreted, and its embankments are built up high to contain the swirling winter water. Over the walls trees and bushes curiously bend over from the higher gardens and between the concrete and stones all kinds of greenery has spouted, like blackberry and caper bushes. It is one of the most scenic streets of the island.

Along the shores of the Gulf of Gera, at the side of Perama, another fertile region stretches with gardens and little summer houses. Here also a fat river crosses. In the summer its channel lies dry between house-high walls, where thick trees have broken the old quay walls, blackberry stems hang down like vines, bamboo grows wherever it can, producing the scent of a dark jungle. Amidst all that lush vegetation, high on a dry shore there is a tavern, that only serves what is cooked that day, just like it has always been in those small traditional Lesvorian taverns.

Hot water springs provide some small rivers with boiling water, causing elegant dancing clouds of steam. The therapeutic qualities of this mineral rich water was discovered far back in history and through the centuries little bath accommodations have been built for the bathers. But Europe, making life so difficult for the Greeks, has invented so much rules for bathing places, that only the modernized and trendy baths of Gera are still open. The opening of the known and cozy baths of Eftalou last summer was tolerated, but they might be closed next year, as the romantic baths of Polichnitos and Lisvori have already been doomed to fall into ruins.

Europe doesn’t care about these bathing places which in fact should be historical monuments, just like the old wooden fishing boats, whose destruction will get a subsidy. This way Lesvos is only left with the refugees. For them Europe has no subsidy and rules, nor are they taking care that the refugee camps keep on being human.

Not everything has been destroyed by European rules, the cold water springs still provide people with drinking water. Nor the river-channel-streets that, just like the many waterfalls, have not yet been discovered by the tourists and hide traditional taverns that are not yet touched by the harsh time.