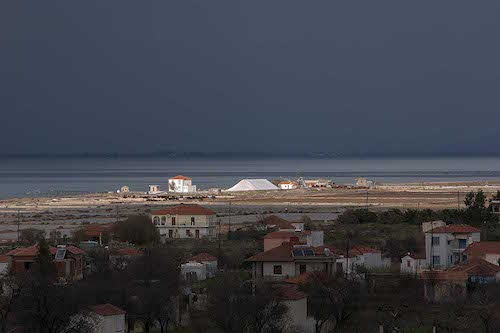 We often wonder why there are so many rare birds to be seen on Lesvos. It’s partly because our island is on the geographical crossroad between the cold north and the warm south, the continents of Asia and Africa.

There is a special attraction for birds migrating back and forth: the salinas — salt flats — at Kalloni and Polichnitos. Black winged stilts and flamingos love these saline wetlands, as do ducks and other small water birds. Many of them are looking for food and nesting opportunities on their journey north in spring.

As long as salinas are well managed, the birds don’t impact the production of salt, and if salt producers take care that birds’ nests are not flooded and there are enough safe places for the birds to nest, then the industry is of ecological as well as economic value.

In the whole of Greece there are seven significant salinas with economic value: two on Lesvos. In Messolonghi-Tourlis the salt is manually harvested and in other regions (Kitros, Messi, Nea Kessani, Aggelochori and in Polichnitos and Kalloni) salt is harvested with the aid of machines. There are some small salinas like on Kythera and Mani where they do as well manual harvest and on some other places salt is harvested from small pools between the rocks at the shore line.

On Lesvos, as you drive across the island from Mytilini to Kalloni you can’t fail to notice the salinas and the huge white salt mountain at the head of the Gulf of Kalloni. Plenty of drivers are annoyed by the salt trucks which travel between Kalloni and the little port of Petra, where the salt is loaded into freighters for distribution to other parts of the Aegean. The salinas of Polichnitos are not so well known, probably because it is less likely to be visited by tourists.

Whenever you add salt to your food, you probably don’t realize how precious it is. Salt used to be even more valuable than gold. You can see the evidence at an antique market where ancient salt shakers feature, but the ordinary plastic modern version might never suggest just how salt once played a leading role in the history of food and civilization.

In his fascinating book ‘Salt, a world history’ the American Mark Kurlansky describes all the many possibilities of usages of salt. Without salt there would be no mummies, no salami, no salt fish, no cheese, no bombs and lots and lots more.

Starting in ancient China and the days of the Egypt’s pharaohs he tells us about civilizations that revolved around salt: wars were fought over salt, revolutions launched, governments became rich from salt taxes, houses collapsed, armies got lost. Kurlansky explains the role of salt in creating the old Roman sauce of Garum, the original recipe for tobasco sauce or a Breton Galette. He also writes about the history of salinas, salt mines, salt mountains and even a salt city and there are simple recipes to preserve fish, meat and vegetables.

Salt fish have always been important in the Greek kitchen. In antiquity fish was brought from the Black Sea to Athens in salt. That way it stayed edible for about a year. Soldiers got salt fish when they went to war and it was said that salt fish was a good appetizer, and so it was often served as a starter at dinners.

You still find salt fish on the modern Greek menu. The sardines from the Gulf of Kalloni are famous in Greece and so are salted tinned versions (which are a very good alternative to salted anchovy) both of which are important export products. I once heard a tourist say that the salted sardines (sardelles pastès) from the Gulf of Kalloni never needed to be salted because of the high level of salt in the water. The Gulf may not be quite as salty and buoyant as the Dead Sea where you can float almost on top of the water and although it is very salty, to make good sardelles pastès you will definitely have to add salt. People who like salted herring from Holland will love this recipe:

Sardelles pastès:
Put 1/2 a kilo of sardines in layers on a scale. Take a cup of coarse sea salt and cover every fish, and between the layers, with salt flakes. Leave them for 6-8 hours in a cool place. Rinse them clean, take off the heads and gut them, drizzle the fish with a little olive oil, sprinkle it with fine cut parsley and serve with two half lemons and a glass of ouzo. Use fresh sardines (caught the same day) and good olive oil. Enjoy!

Last weekend Athens celebrated the opening of the New Acropolis Museum. Of course, no museum on Lesvos is that sensational. But Lesvos can be proud of a lot of small and very different museums. The nicest is the Natural History Museum of the Lesvos Petrified Forest in Sigri and the most remote one is the Lakovidis Digital Art Museum in Xidera. According to the salt project ALAS a salt museum was planned for Skala Polichnitos in 2003, just next to the salinas. There’s been an exhibit but so far nothing else. So I can only wonder what happened to that project?