Pearls from the sea 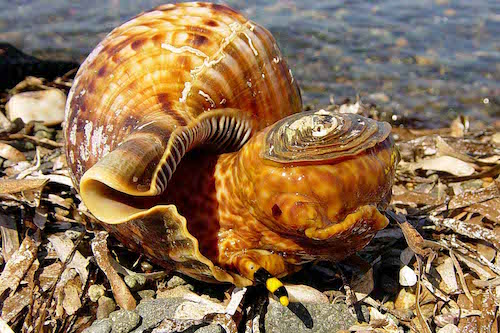 On a day here at the beach I was flabbergasted when I admired a Triton-shell that had just been fished out of the Eftalou-sea by a fisherman, when suddenly a very strange ET-like creature came creeping out of the shell. It even wore a hat!

It are molluscs that create the beautiful shells we find at beaches. They have three parts: the foot, the interior and the mantle, which is their skeleton or shell. So they have their skeleton on the outside and use it as a shield from predators. Despite looking so weak, many of these beautiful coloured animals are not so soft and friendly.

They chase their own kind and even other sea animals. One of the biggest Triton shells, the Triton charonia, for example, eats starfish. He stalks them, tears off some of the tough skin of the starfish and injects a poison, in order to enjoy his five-star-dinner.

There are stories told that a human can be killed by a Giant Clam, (Tridacna gigas), the biggest seashell that can grow to over a meter and live to a hundred years old. When you actually see the animal that lives inside this clam you immediately believe those stories about getting stuck in the shell and drowning: but the stories are said to be fairy tales. Just as it’s not true that the Goddess of Love, Venus, was born out of a Giant Clam, as pictured by the Italian painter Sandro Botticelli in his famous painting The birth of Venus. He might have meant it symbolically, because in his time clams were seen as vulvas. But we all know that Venus was born out of the foam of the waves at Cyprus.

Nowadays shellfish are seen as culinary delicacies, like oysters, venus shells and Coquilles St Jacques. In the past the ancient Greeks and Romans used to make a purple dye out of Bolinus brandaris (originally called Murex brandaris). This must have been very expensive stuff because to produce one pound you needed at least 30.000 shells. To make the dye, glands of the sea animals were boiled with salt in urine, so you’d better didn’t live close by because of the incredible bad smell. It is a wonder that the Bolinus brandaris survived until this era; it still creeps over the sea bottom around the island.

They also produced seasilk in ancient times. The silk was made from threads produced mainly by the giant mussel, the Mediterranean fan-shell (Pinna nobilis Linneaeus). Cleaning blue mussels the beards have to be removed. These are the hairs for the silk. The Mediterranean Fan-shell can grow to 120 centimeters and grows even more bigger beards. The silk made with this sea hair is finer, lighter and warmer than the normal silk. Some people think that the Egyptians buried their pharaos in seasilk and in China it is also called mermaid silk.

I recently bought the Dutch book Sea shells from the Greek islands (Schelpen van de Griekse eilanden; only available in Dutch) by Jan Veltkamp and Sylvia van Leeuwen, in which they describe 80 shells to be found on Lesvos and other Greek islands.

Like there are Chama gryphoides Linnaeus and the Pseudochama gryphina, who have most curious names in Dutch, translated as ‘Right turning jewel box’ and ‘Left turning jewel box’. They look like the irregular oyster, but are smaller and the lower part of the clam is deep and the upper part closes like a lid on a box.

There are no Giant Clams around the island but there are plenty of Venus shells. It is not always easy to distinguish the shells, but the Mediterranean fan-shell is easy to recognize. There still are plenty to be found around both the Gulf of Kalloni and Gera*. Beside beards they also grow pearls. Pearls are made when some grit enters the shell and gets covered by mother of pearl. The Mediterranean fan-shell however is now a protected species, due to over-fishing and pollution. I presume they were not yet protected in 2002, when publishing the booklet Panorexia, ouzo appetizers from Lesvos by Stratis P. Panagos. Amongst the recipes you will find one with the Mediterranean fan-shell: Pinokeftedes. Mix the chopped fan mussel with onions, bread, an egg, some ouzo, trachanas and Oregano, knead it into balls and fry them in the oil. But you are no longer allowed to make those. So I make legal keftedakia with Venus shells (Kidonia). Venus balls — that really sounds good!

*2019: An international disease makes the number of Mediterranean fan-shells grow smaller and smaller.