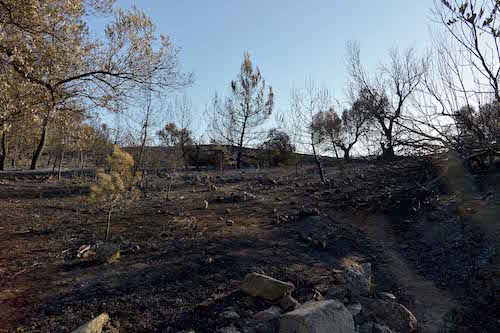 When the earth heavily shook from the earthquake whose epicenter was close to Samos, I didn’t feel a thing until a friend passed by and asked if I was afraid. We both then noticed the lamp above the table that was swaying, probably triggered by an aftershock. When I looked on Facebook to see what was happening, it seemed like I was the only person not having felt the earthquake. Then there came a tsunami warning over the telephone, which was a bit scary: we never got such a message before. I looked at the sea and I tried to imagine a house-high wave storming in my direction. Should I go? I didn’t believe that a tsunami could roll all the way from Samos to Lesvos. Yes, I know, it is possible, but surely only after a much stronger earthquake. I lay down with a book, read some pages and entered my siesta. Just an hour later the sea seemed to be untouched.

But I feel for Samos (and Izmir) having so much damage and casualties. Imagine, a boy of 17 and a girl of 15 (maybe they were in love) walking home along the picturesque streets of Vathy (Samos), when the earth starts trembling, so badly that an old house collapses and a wall falls on them. I also saw pictures of a lot of collapsed buildings in Karlovassi, some of which I had photographed when I had a holiday there a few years ago. I loved Karlovassi for these old industrial buildings at the seaside and now many are gone. Just like in Skala Polichnitos (Lesvos), that also had some sturdy old industrial buildings along the main road. The earthquake at Vrisa in 2017 gave them the ultimate push to collapse.

A lot of destruction this 2020. A few days ago I finally took a walk through the burnt area above the house. I climbed hills, I had never done before because they were overgrown with trees and bushes. A clump of young fir trees perished, where each year I used to pick one to disguise as a Christmas tree. But it is sensational to see the green colour of plants, kissed awake by autumnal rains, taking over the black colour of the scorched earth. The wild asparagus especially seem to be in a hurry to be in the sun. There even was an autumn orchid (Spiranthus spirales), never seen in our region. I bet there will follow more surprises, now that sun loving flowers have got plenty of space.

From the trees and bushes, lucky to have escaped the fire, another unexpected thing happened: two deer who threw their noses in the wind. They had been spotted weeks before, but when gunshots sounded through the hills, I thought they were somewhere in a freezer, waiting for Christmas. Last year there was another escaped deer. It was pretty tame, came into the garden and became friends with the dogs. I couldn’t find anybody to catch and save her and when her photograph appeared on Facebook, it didn’t take long before I heard gunfire. The deer never came back to the garden to eat from my rose bushes. This new deer duo is not that tame and I have not yet seen them in the garden. They remind me of being in the Belgian Ardennes, where I used to stay for many a December day, luckily often in the first snow.

Those cold days are still far away on Lesvos, even though the days are now ruled by the winterclock and the temperature slowly declines. Some days ago it was still summer in Yeni Limani when fresh fish ended up on my plate for lunch. Lesvos (and the other Greek islands) is so lucky to not yet be in lockdown. I hope there will follow lots of those great lunches in the sun. Those are days that you completely forget that the world is changing rapidly and nobody knows where we are heading. While on one side of the island the new refugee policy is proving to be a catastrophe, on the other side of the island nothing seems to change, unless through wildfires or earthquakes. You realize how fragile life is, but you also realize that life will go on, no matter what.