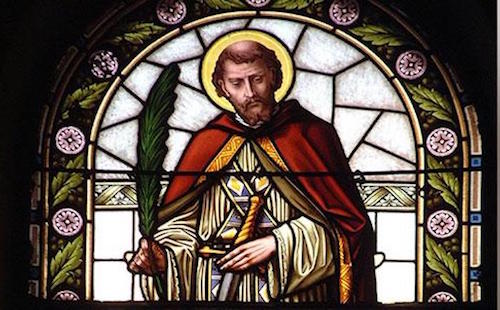 Yesterday it was Valentine’s Day and Carnival, but in Mytilini at the Franciscan Church no postman or delivery-man came to the door and for some people it was not such a joyful day to celebrate: because the holy bones of St Valentine were not returned to Lesvos.

According to the Lesvorian paper Embros the Catholic parish of Lesvos counts about sixty souls. They have their Franciscan Church on the Ermou (the ‘First Avenue’ of Mytilini), a church that was founded in the 19th century when foreign salesmen, from a.o. France, Germany, England and Italy, came to settle on the island. How the shrine with the relic of St Valentine arrived at the island is not known. Probably it came with an Italian family. However the archbishop of Smyrna who visited Lesvos in 1907 confirmed it then as an authentic relic. Later the shrine was donated to the Catholic Church and that is how Valentine found his place on the Ermou.

After the Ottoman Empire collapsed and took in its fall the flourishing economy of Lesvos, and after the Second World War raged over the island, the church and its valuable relic were more or less forgotten. It was only in 1990 when a priest rescued the holy shrine from the neglected church and smuggled it to Athens where it found a new home in the Francis & Clara Church.

Then there was an agreement made that the holy souvenir would be returned to Lesvos in 2009. However, part of the ceiling of the Franciscan Church in Mytilini fell down and Valentine had to wait for another year. But this year there is still scaffoldings in the church and the entrance is hidden by all kinds of boxes from neighbouring shops. Not the kind of welcome you should give the return of a holy saint!

Valentine’s Day is now becoming more and more popular in Greece, so shop owners around the Francis & Clara Church in Athens do not want to let Valentine go to Lesbos, because they do good souvenir business thanks to him. And then there are the civil servants who apparently are working too slowly to get all papers ready that are necessary for saint’s translocation.

Which parts of the real St Valentine are in the old shrine is not sure and such vagueness is the story of his life. In fact Valentine was not on the official Catholic list of Roman martyrs. And it is not known who he really was. There are at least three who might qualify to be the cherished saint. They were all murdered by the Romans for helping Christians, a crime in Rome during the first three centuries after Christ’s birth. The contenders are a priest from Rome, the bishop of Interamna (nowadays Terni) and a martyr from what was then the ‘province’ of Africa. There is only agreement that at some time between the years 200 and 300 a certain Valentine was buried a little north of Rome on the Via Flaminia.

There are more stories about why Valentine became a saint. The bishop of Terni married a Roman soldier to a Christian girl, which was also forbidden. He then went on to marry many other ‘illegal’ Christian couples. Then there was the story of a prisoner who tried to heal the blind daughter of his guard and when he was executed, the daughter received a little note from Valentine containing a flower and she got her sight back and her father then converted to Christianity.

In 1836 the remains of Valentine were discovered in the Roman catacombs. They were probably divided into thousands of small bones and then donated (or sold) as relics to people all over the world who now claim they have a relic of St Valentine. One notable location with its own St Valentine shrine is Whitefriar Street Carmelite Church in Dublin, Ireland. But there is also the French Roquemaure, the Austrian Vienna, The Scottish Glasgow and the English Birmingham all of which claim they have parts of St Valentine’s body. Lesvos also makes the claim, but of course, at the moment, its relic is temporarily exiled in Athens. That’s what happens to icons: they come and go. Have a good Valentine’s Day.