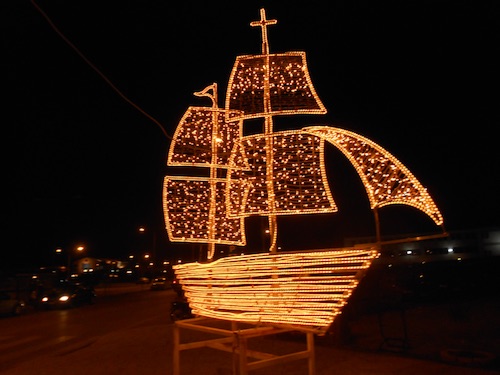 It has never been completely proved that Christmas originates from pagan festivities like the Romans’ Saturnalia, when social roles were reversed, slaves were served by their masters and people gambled their fortunes away. Saturnalia was named after the Roman god Saturnus who, lest an oracle’s prediction that they would kill him came to pass, ate his own children. Saturnalia lasted at least a week from the 17th till the 24th of December, so that the dark god was fully appeased and new life was welcomed at the end of the year.

For the Romans the party didn’t end there. After Saturnalia came Juvenalia, a celebration for children who were spoiled with gifts and tokens of good luck. And then on December 25th the miraculous birth of the Persian god Mythra was celebrated. He came as a man out of the rock, with a knife and a torch in his hands. He was a Sun God and fought against darkness. And then there were some other lesser Roman Gods who were also celebrated in December —the ultimate party month. In the year 274 emperor Aurelianus decreed that one day was enough for all this – the Sol Invectus – to be celebrated on December 25th.

This was at the time when the Christian religion was gaining popularity in the Roman empire and with it the question: what was the true date of Christ’s birth? Some thought it was April 19th, others said it was on the March 25th or 28th. There was a suggestion that it should be January 6th but the bishop of Rome was not in favour. Since people were also tired of the endless pagan parties of December it was decided in the year 354 by Pope Liberius that the birth of Jesus would be celebrated on December 25th.

As it happens this date for the birth of Jesus was close to the shortest day of the year in the northern hemisphere day – December 21 – mid-winter, when the victory of the light over the darkness was celebrated with lots of lights.

And what did the Greeks do? They may have invented the December tradition of Saturnalia, by celebrating their god Cronus, the same deity as Saturnus, but they were not so fond of this youngest son of the Titans who liked chaos and also ate his own children (for the same reasons as Saturnus). So Saturnalia on a grand scale was really the doing of the Romans. The Greeks preferred their own god Dionysus, the god of wine and parties. Around midwinter they celebrated Lenaia, the Day of the Wild Women, the Maenads, the female followers of Dionysus (TB: who supposedly tore apart the poet Orpheus and tossed his body to the four corners of the world — his head is believed to have floated across the Aegean and landed here on Lesbos). On Dionysus’ day a man, or a bull, was killed and cut in pieces that were then eaten raw by the same Maenads who then sang and danced as really crazy women. Later on the Lenaia turned into a theater festival in Athens where plays like those of Aristophanes were performed,

Christmas in Greece is not so wild these days. The children go around the streets with triangles and little drums and sing Christmas carols and are rewarded for their efforts with candy and small gifts of money. The carols (calanda’s) they sing are very old and it is is said that in ancient times when they called on houses to sing, they carried with them a little ship, a symbol of the arrival of the god Dionysus.

Christmas is of much less importance than Easter in Greece. Maybe that has something to do with the Greek distaste for the excesses of Cronus. In the dark month of December the Greeks are more likely to barricade themselves inside their houses, in front of their TV sets, waiting for the days to grow longer. Presents are exchanged on the first of January, brought by Agios Vasilis, the Greek Christmas Man, and as during Saturnalia they still like to gamble on card games, but that also goes on at New Years Eve. Winning a game is supposed to bring luck for the coming new year.

The Christmas period in Greece is from December 23rd untill January 6th — Ephiphania. On the last day Greeks have a special celebration all their own when the waters, seas, rivers and ships are blessed by priests. In Holland on that day we celebrate the arrival in Bethlehem of the Three Wise Men (or Kings) who came from the East to visit the newborn Jesus. But they are totally unknown in Greece, unless they be the Pappas, the head of the Coastguard service and the Mayor that usually walk together in front of every public procession that you see anywhere in Greece on that day.

It is also possible that at Christmas in Greece you can encounter a plague of little men — kobolds, called in Greek kallikantzari’s — that try to invade your house, piss on your food or make other minor nuisances of themselves.

And there is of course the Christmas tree which for Greeks is a modern tradition that comes from the West. The Greeks used to decorate a little ship at Christmas, a symbol for Agios Nicolaos, the patron saint of fishermen and sailors.

Nowadays, more and more Christmas lights appear all over Greece, but Christmas still is a comparatively minor celebration. But there is one thing the Greeks will do as everywhere else on December 25th: they wish you a very merry Christmas: Kala Christoujenna!