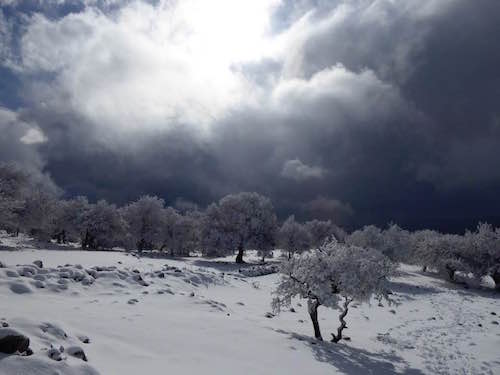 The sun kept up tradition by shining on January 6, the day that the Greeks stream to coasts and rivers to celebrate Epiphany. The priests lead the procession, followed by the notables and thereafter the rest of the village. With a cross and a bunch of basil everything that floats onthe water is blessed, where after the cross is thrown into the water. Even though the sun appeared, it was freezing cold in Molyvos. The Lepetimnos, dressed in a white fur coat, smiled upon the village. I think the boys who dived into the water on this particularly cold day were pretty sturdy.

The winters I’ve spent on the island have not all been mild and rainy, like this season on Lesvos is being described. Nearly every year the highest tops of the mountains got a bright snow cap and on two occasions I was able to build a snowman in Eftalou, which was a wonder according to the locals, who had never (or only once in their lives) seen this happen.

The first two winters, some 15 years ago, were pretty rough, wet and cold and Molyvos got more than once covered with thin layers of snow. I didn’t believe the inhabitants who said that they never seen this. I listened with a bright smile to stories about warm winters when you installed the barbecue on the beach and you even slept the nights away on the beach: I didn’t believe it. It might be that I lived through one of these magical warm winters – there always are days that the sun is so strong that you can imagine it is summer – but most winters were as cold as in Holland.

There are lots of scientific reports saying that even Greece cannot escape global warming. In the coming decades temperatures may rise some degrees. Then they mostly talk about warmer and longer summers. I haven’t read much about the winters. Could it be that the summers get warmer and the winters colder?

Once on Lesvos, on a January day, in the year 1850, within one hour the temperature dropped some 13 to 15 degrees to far below zero. The juices in trees and plants, who were just preparing for spring, froze and even enormous trees broke like tiny matchsticks. Also lots of animals died. That winter with most trees and plants dead was then followed by famine, causing an emigration wave.

You do not want to experience such a phenomenon. Until now this winter has not been so harmful, even though it started too early. The inhabitants of the mountain villages on Lesvos had a white Christmas and when they woke on the very first morning of the new year they were again in a Winter Wonder Land. Today, whilst those boys dived into the freezing water, merry sun rays lit the surrounding snowy mountains (even in Turkey the snow on high tops radiated like diamonds) and gave the feeling of a winter sport atmosphere.

Imagine if this this trend were to continue, then we could organize on Lesvos an Eleven-village-tour: from one mountain village to another through the snow, by ski, or sleighs tugged by dogs or just by foot. Even now all Lesvorians are hurrying into the mountains to experience the snow. Just think about it: Lesvos as a winter sport destination.

It would revive the villages around Lepetimnos and Olympus. A cable car from Agiasos to the top of the Olympus, or one from Vafios to the top of Lepetimnos would be a tourist attraction even without snow. You could also build a spectacular bobsled track, winding down the mountain slopes while offering super views over the cold blue sea. Besides ouzo there could appear on the menus hot chocolate and Lesvorian cheese fondue. The sheep wool could be preserved again in order to knit warm sweaters to sell to the tourists.

It really is a pity that nobody can definitively predict what the climate will do. Yes, warming up. You can see that in the Netherlands. The memories of the Eleven-city-tour, a very popular ice skating tour in the north of Holland that took place nearly every year in the past, now takes on mythological proportions. And the summers get warmer and dryer. I do not feel that summers here on Lesvos get warmer, only that winters get colder.

If they would be sure that winters here will get colder, then we can start designing tourist friendly bobsled tracks and environmentally friendly cable cars. And of course start arguing who would be responsible for the ski slopes and the youngsters can start practising snow boarding. So, are the winters getting colder on Lesvos or not? That is the question.