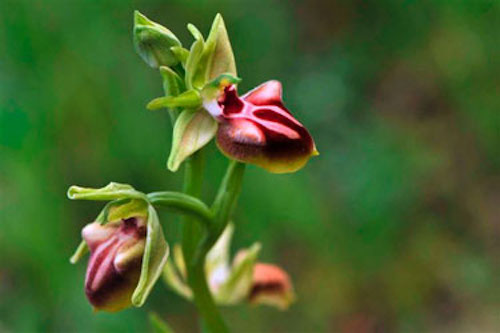 Every spring I am flabbergasted by the profusion of wild flowers that grow here on the island. It starts with the very colourful anemones, which sometimes come on as early as December. Then follow poppies, shaggy cistus, daffodils and soon all the fields, hills and mountain slopes are full of all kind of flowers. Tourists who come here only in summer will never have any idea what the dry earth they see brought forth before they arrived!.

The flower of flowers has to be the wild orchid, known to many specialists and collectors all over the world. It is not only the fragile beauty that makes the orchid into a collectors item for many people, it is also the fact that the flower is able to change itself, a quality that is unique in the modern world of plants.

For example, the fertilization biology of the Ophrys, the Bee-Orchid is fascinating. Many kinds have developed a scent, a structure and colour pattern that mimics the female bee, wasp or beetle and this is how they attract the males of those same insects. The flower gets fertilized when the male tries to copulate with the flower…

On Lesvos there are about 60 to 100 different kinds of wild orchid, (opinions vary), and when you look at all the varieties you can understand just how a bee might make a mistake — because the differences are very hard to see. It is quite easy for a bee to accidentally visit an Ophrys that does not look at all like the right kind of female bee, but if the natural order of things proceed as they should, from this cross-fertilization a new variety or sub species is born.

Orchids don’t only drive bees crazy, but butterflies and their collectors too, as well as a group of people which believes an orchid is an aphrodisiac. The sexual implication is right there in the name because in Greek: orchis means testicle, and if you dig up an orchid you will find that it sprouts of two tiny bulbs (or tubers) which suspend from the stalk like a pair of balls.

It was Theophrastus (371–287 BC), the famous scientist from Lesvos, and often called the first botanist, that gave this eccentric flower the name of orchis. Some hundreds of years later a famous Greek doctor, Pedanios Dioskoridis (40-90 n.Chr), wrote in his ‘De materia medica’ that Theophrastus was right to say the orchid could stimulate the sexual appetite of a man.

To that end the most important product of the orchid is called salep, which comes from the Arab word for fox testicles, in Greek salepi. You dig up the bulbs, dry them in the sun until they are hard and then grate or rub them, until they turn into a fine flour. One of the secrets of the French chocolate maker and Royal warrant holder Sulpice Debauve, who had several famous chocolate shops in Paris around the beginning of the 19th century, was that he used salep in his chocolate.

Salep is also the name of a once famous drink which is made by heating milk and sugar with it until it becomes creamy and is served with a sprinkle of cinnamon. In the 17th and 18th century, before the hype for coffee and tea spread through Europe, the drink was really popular, especially in the Middle East and Turkey, and even England. For a long time in Greece and Turkey it was sold on the streets and in kafenions. People who could not afford coffee, would drink salep before starting work, because it had a similar stimulating effect.

Nowadays it is said that maybe you can still find some street vendors with salep in the streets of Athens, but in general it has disappeared from Greek life, mainly because wild orchids are protected flowers in Europe, and making salep is prohibited. However, in Turkey its consumption continues as before, especially during winter, but also in summer Turks like to have dondurma, a kind of ice cream made with cream, milk, sugar and mastic mixed with salep, until it becomes a gummy kind of mass. It is so thick and gooey, it has to be eaten with a knife and fork and so elastic, that you can tear it into long ropes you could use for skipping!

However the popularity of dondurma ice cream is a headache for nature conservationists. To make one kilo of salep you need at least a thousand orchid tubers! So imagine how many were needed in the days when Turkey exported hundreds tons of salep. Nowadays the trade is forbidden, but even though shepherds and other collectors warn that it’s getting ever harder to find the orchids, the Turks are still avid consumers of their dondurma, and are unlikely to give it up. However, it’s a real possibility that wild orchids will completely disappear from the Turkish landscape.

The major quality of salep is that it makes milk or water thicker. Probably, the salep sold nowadays contains only a small amount of orchid flour mixed in with cornstarch and vanilla. The orchid bulb has such a fragrant taste that it does not matter too much if you amplify it with cornstarch.

Dondurma ice cream does still exist in Greece — called Kaimaki Ice. To make it (and spare the orchids) here’s a recipe for Phoney Fox Testicle Ice Cream: using cornstarch, vanilla powder and some rose or orange-blossom water (and you need an ice cream machine).

Mix the cornstarch with some milk. Heat the other milk with the sugar and then add the mixed cornstarch and the other ingredients. Stir everything while it cooks until it becomes like a cream. Let the substance cool off and make ice with it in the ice cream machine.