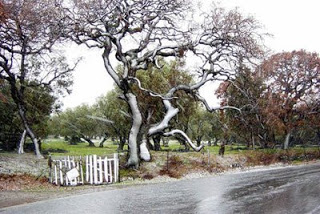 They say that the Dutch always talk about the weather. But what about the Greeks! As the Siberian winter sneaks into Europe from the east, the Dutch news media continues to squabble over crisis politics, but the Greek media cannot get enough images of the cold and the big snow that is drifting into the country.

For a week they have been preparing us for the big cold. A few days ago the forecasters predicted a temperature of -11°C for Lesvos. Which is pretty scary. I come from a cold land in the north, but for an island that has a natural environment that can handle only a few light bites of frost, that prediction was pretty bad.

In the nineteenth century Lesvos was hit by three great catastrophes: in 1836 the island was infected by a plague which killed 25,000 people. In 1867 a severe earthquake did great damage and the third disaster was a real calamity: the Big Frost (Kais) of January 12, 1850.

According to the writer Prodromos Anagnostou in his booklet Froso’s Little Violets a bitter cold set in on the eve of January 11. The next day people went to work in their fields as usual. Suddenly the sky turned black and threatening and although it was too early to finish the day, people felt disaster was coming and went home. The goats, sheep and donkeys out in the fields were also affected by the deep drop of the temperature, so they too went into the villages for shelter, stopping in front of the doors, begging to be let in.

Until then it had been a beautiful winter with mild temperatures and a lot of sun. Nature was ready to embrace spring. Trees were full of juice for the buds and new fruit and the first almond blossoms were merrily rocking in the sunshine. At midday the sea started smoking, two hours later the temperature fell to -13-15°C! The ground spewed out the newly sowed grain and there was a terrible sound: the bark of the trees tearing open.

The cold destroyed large numbers of olive trees, fruit trees and many other crops and many animals died, there was famine on the island and no work in the fields. Many people left the island and emigrated to Egypt, Smyrna (Izmir) and Constantinople (now Istanbul) searching for a new life. Some of them constructed entire new villages in Anatolia.

It is difficult to imagine how Lesvos looked after the Big Cold of 1850: barren trees, no flowers, no blossoms, no green. Now we have the internet to warn us of such threats. And the weather forecasters seem to enjoy making gloomy predictions. The terrible cold from Russia that was ready to sweep into Europe became a mighty threat and in Greece the predictions were also dire. But the day after they had said it was -11°C, they adjusted the temperatures upwards to -8 °C for several days in a row, which would have been bad enough for this island. Later they revised the temperatures upwards again. Lucky us, because we really do not want to flee this island after another Big Frost.

Today, Tuesday January 24, Siberian cold has reached us. The actual temperature is around zero but a gale from the north-east makes feel like it is well below. And you never know. Two years ago we had a very sharp drop, which killed several trees and other crops: in one hour it fell twenty degrees from +10 °C to -10 °C. The majestic eucalypts are still recovering.

Now the mountains are slowly turning snowy white and the first showers from a mercilessness blizzard are racing across the fields. Will Lesvos survive this great Russian Cold?