It rains and it rains 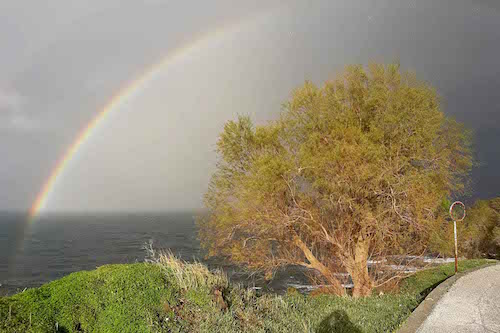 It is said that Dutch people always talk about the weather. However here on Lesvos we have champions weather talkers especially when the weather is out-of-tune. For instance, when all the rain fell this month, there was no other conversation possible. In ancient times Greeks had the gods to bargain with or to plead for some sunshine.

Agamemnon for example made a horrible deal with the gods: he and his army were on the way to Troy when he got into a quarrel with the Goddess of hunting, Diana (he shot her favourite deer). She stopped the wind so that he could sail no further. To have the wind blow again he offered his own daughter Iphigenia.

Odysseus also ran into troubles with the winds. Coming back from fighting in Troy, he visited Aeolus, the upper god of the winds on his island Aeolia. He entertained his host with colourful stories about the fightings and Aeolus thanked Odysseus by giving him the west wind that would blow him back all the way to Ithaca, where Odysseus’ wife Penelope was impatiently waiting for his return. Aeolus also gave his guest a closed bag containing the other winds, warning him that the bag was not to be opened. Upon his return to Ithaca, Odysseus was so tired that he decided to take a little nap. His crew, who had speculated what could be in this mysterious bag, then decided to have a look and opened the bag, hoping it was full of gold and precious stones. But it was the winds that rushed out in full anger, blowing the boat back to Aeolia, where Aeolus showed them no pity and threw them off his island. And so began the long and famous journey home of this Trojan hero.

Chione is the name of the Greek goddess of the snow. The rain does not have its own god. All the water that is dropped on earth from the heavens is sent by Zeus, who is also responsible for thunder, lightning and rainbows. Zeus is a moody God: be careful of making him angry.

And angry he is at this moment. He tortures the country, in any case Lesvos, with tons of water that form countless new rivers and waterfalls, make dangerous swamps of the olive fields, flood houses and cellars, this way making the people desperate because no mop can help here. Thundering dark clouds keep chasing over the island to discharge their water.

A very long time ago, when Zeus was maybe even more angry as now, he sent so much rain to Greece that the valleys filled with water, fields got flooded and the water rose higher than the trees, villages and cities. Prometheus whispered to his son Deucalion to quickly build a raft, and so only Deucalion and his wife Pyrrha survived those dramatic floods. The couple stranded on Mount Parnassus (or it could have been Mount Athos, Mount Othrys or even Etna in Sicily).

It is funny that in this Greek version of Noah and his Arkthere are no animals involved. It is however a kind of Creation Story, because when Deucalion asked Zeus how he could revive the world, he was told to bow his head while throwing the bones of his mother over his shoulders. Both he and Pyrrha interpreted this as mother Earth. They picked up some rocks and threw them over their shoulders and indeed created new people.

Those new people still believed in the responsibility of Poseidon for volcano eruptions and earthquakes, or that the goddess Athena could make the world disappear in a fog. But slowly people started to realize that not all weather depended on the moods of the gods. Greek poet Hesiod, who lived around the same time as Homer, wrote a famous poem called Works and Days, which is rather like an almanac. Itgives plenty of directions to farmers, for example when the stars are at the right position, to sow or to harvest, or when sailors can safely set out to sea.

Also Aristotle was an observer. In his Meteorologica he wrote about all possible weather phenomenons like snow, hail, thunderstorms or whirlwinds, which he tried to explain without the interference of the gods. He compared the wind reviving a wood fire and causing a crackling sound, with the wind raging through the clouds thus causing thunder. Okay, that explanation (like others in his book) were later proved wrong, but it is a fact that from those times the gods slowly lost control over the weather, because it became better and better explained by reason and science.

Nowadays nobody would be so foolish to go to Zeus to beg him to please stop these torrents of rain. Although I do believe that there are Greeks who go to their favourite little church or chapel to burn a candle and ask the gods to stop the floods. And because there are so many churches on the island, I suspect not all those gods have left. What will they do?