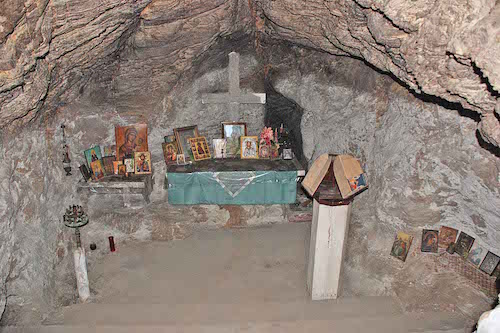 When you think about the Greek islands, you see white little houses and blue water. Green hills, ruffling trees and juicy meadows are not in this cliché. But – especially on Lesvos – in the winter green is the ruling colour. Only after the flower explosions in May the landscape slowly looses life and the grasslands turn straw-blond. People only coming in the summer and autumn may not know this.

This year everything is different. After the pretty wet winter, the rains extinguished, temperatures shot up and created something close to a heatwave in April. The month felt like May where the heat of the day was compensated by nice cool evenings. Also nature, suddenly without rain, reacted: the landscape withered rapidly and yellowed. I wonder what kind of summer will follow.

Lesvos, being rich in many natural sources, will never dry out, at least that’s what I thought. But you see that some of those rich with water wonders do disappear. It is said through the grapevine that it is the farmers who are to blame. They drain natural sources, causing streams to dry out, for example the Pessas waterfall at Achladeri, that for years now just drips a bit; and the waterfall at Klapados also seems to have had its best watery time.

This week I visited the little church Panagia Zoodochos Pigi on Faneromeni beach next to Sigri. Zoodochos Pigi means life offering source (one of the many names the Holy Mary has). Indeed there used to be a source in the church that is built around an open cave. Downstairs in the cave is the altar, behind it is a huge opening in the rocks, where the source used to be. There also once was a little river going from the church to the sea, where you could find huge delicious oysters.

The beach where the church has been built is named after an apparition of Holy Mary (Panayia Faneromeni). It is not clear if she was spotted at the cave, or just sunbathing on the beach. Maybe that is why the beach and the church have different names. I did not see any Mary in the cave, just a fat mouse climbing up and down the huge cross behind the altar. So there is life in this little church: the rustling even sounded spooky. When I shone a lamp at the hole in the rock behind the altar, a big black and silver snake slithered from the hole. I got a fright and ran back up the stairs. You never know what life this source is giving!

But there was no water to be seen, even though the weather gods poured so much water over the island last winter. Later somebody told me that he had seen the little church being built and even tasted those holy oysters. But since so much agriculture came to the region, slowly the source dried up, as did the little river.

Faneromeni is not entirely dependent on the Gods of the desert. A river still ripples through the landscape towards the sea, with photogenic reeds, croaking frogs and lazy turtles. It remains a watery region with abundant vegetation.

One monastery on the island did not lose water, but got a whole lake in front of its gate: the Pithariou Monastery at Erèsos is named after the gorge (which looks like a jar), that it once looked over. Of course it was not like from one day to the other the new lake was there and the monks could go fishing. It is a water reservoir built to tame floods and to provide water for the local agricultural.

Lesvos has other reservoirs, like the one at Molyvos and the reservoir at the Sedoundas river, high in the mountains above Plomari.

The island nearly got another reservoir: in Eftalou.
Last week my toilet did odd things and when the plumber came to have a look he found a huge pool under the house. The house could have sailed away on this big underground lake. Tree roots had blocked the drain pipe and the hills above the house collected so much water that a reservoir had built up. It took hours to get the water away through the unblocked drain pipe.

Now I suddenly think that maybe we should have kept this reservoir. With the summer already started in April, how much water will be left in August? But then I would not have been living besides a sky blue lake like the monks at Pithariou, but in a swampy brown one, a paradise for mosquitos.