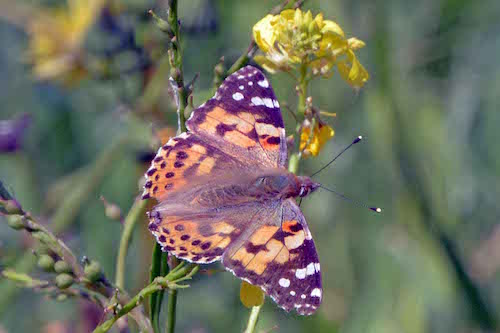 The spring ball has been begun: millions of flowers have opened their tender petals and are winking at the sun, insects have been awakened and are buzzing happily in the sunlight. The sun however is not always present. Regularly low flying clouds veil the bright green mountains and showers make sure that the rivers (totally dry in summer) keep on streaming. I wonder if it’s this past wet winter and the unusual April weather that has caused the phenomenon I have never before seen on Lesvos?

Since yesterday, as soon as the sun shone, the fields of flowers were veiled by a flying cloud of thousands, maybe millions, of graceful butterflies, slowly moving north. It looked like a snow storm of whirling flakes. The flowers could not complain of a lack of attention: one butterfly after the other landed on them. It must have been a bit frustrating, traveling in such big numbers: to set yourself, tired and thirsty, on a flower in order to drink from the nectar, but ooops, its heart is empty, too many got there before you! So thousands of these butterflies fluttered excitedly above the flowers, looking for a snack.

It felt as though I was visiting the Butterfly Valley in Rhodes, a valley where masses of Jersey tigers (Callimorpha quadripunctaria) celebrate their summer holidays around the Oriental Sweetgum trees. Here on Lesvos, twodays running, it has been the Painted Ladies (Vanessa cardui) that have flown all over the fields. The points of their wings have a black and white mosaic and elsewhere they are orange with black. Upon closer inspection of these tender beings, you cannot believe that their frail wings have brought them thousands of miles. Just like the sand of the Sahara that often comes with rains, these fluttering souls have crossed the desert to come to a cooler north. I thought butterflies lasted only a summer, but no: in spring they make a long journey and some of them even make it back to Africa in autumn.

Migrating butterflies. I’ve never heard of them. There is little research about them. The best known migration takes place in America, where a huge number of Monarch butterflies fly from Central Mexico and California to North America and Canada. The Painted Lady Migration in Europe, from Central Africa to Middle and North Europe is little known. According to researcher Gerard Talavera, in his National Geographic article, these butterflies are the world champions in the longest flights. He followed them deep into Africa, because previously their traces disappeared in the Sahara. Talavera now found enormous communities of Painted Ladies in Chad, Benin and Nigeria, where, after having crossed the Mediterranean, African mountains and the Sahara, they can quietly hibernate, in some places as many as 20,000 per hectare. No wonder that in spring they long for the luxuriant, cool green of Europe.

Not all butterflies make it up and down to Africa. During the migration they will have off-spring, that continue the travel north or southwards. Don’t ask me for details: I already find it difficult to believe that I suddenly have a garden full of butterflies from Africa. I do understand that Sahara sand can get a ride with the wind, but that these tender butterfly-wings can travel so far is a small miracle of nature.

The migration doesn’t start on the same day each year, nor is the route always the same. Those decisions depend on the weather. Normally they travel pretty high through the sky, a reason I might not have seen their migration party before. Maybe this year, because of the unusual abundance of flowers and nectar on Lesvos and other Greek islands, they organized an island hopping in the Aegean. In a few weeks they will arrive at their North European destination with their little bellies full of Greek nectar. Greetings from Lesvos, they will whisper.