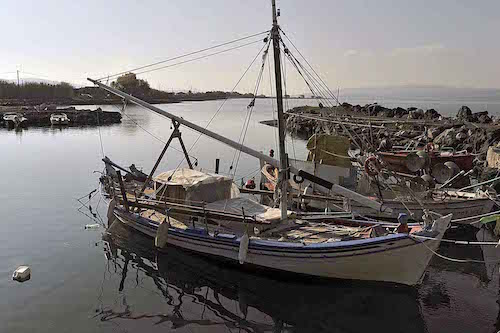 (A traditional fisher boat in the harbour of Skamnioudi)

In the story of The Mermaid Madonna by Stratis Myrivillis a fisherman takes his boat to Mytilini. In the past, lots of people used the sea to go places. Going from Mytilini to Molyvos, you could wait for a ferry, and even though the ship came from a distance, it was a regular connection. Going over the water was in many cases much more comfortable and quicker than crossing the rough mountains on the back of a horse or a donkey.

Greece was a seafaring nation. It is even said that the first inhabitants arrived by boat. But I don’t believe that, because Lesvos used to be glued to the Asian plateau, and it’s from there that hunters, mammoths, prehistoric elephants and apes came to explore the region. Seeing all that water, the hunters must have begun fishing and it would not have taken them long to start to build boats in order to catch more fish.

In Ancient Greece warships formed the main fleet. Even when their conflicts were not fought mid sea, soldiers had to be transported over the sea, like during the Trojan war or the Battle of Marathon against the Persians. Also mythology tells us lots of adventurous sea tales, the best known being that of superman Odysseus, who could not find his way back home after the Trojan war. He did not have an astrolabe, an instrument to show your location on the oceans (that was invented either in the 2nd century BC by Hipparchus, or in the 4th century by the first Greek woman mathematician Hypatia; the scientists are not sure). But from that time on you could no longer come home and get away with telling your wife that you were lost at sea. So ships were for commerce and war, and some for fishing to feed all the men.

At the end of the 19th century, business on Lesvos was booming and the shipyards had plenty of work, some of them became famous for their craftsmanship, like those in Plomari and Perama. First they looked for the right trees, then they started the sawing and hammering. The craft passed from father to son.

One of the many pleasantries in Greece today is to settle down in the shadow of a terrace in a little harbour, or just in the sun when summer is not yet there. As is: enjoying screaming seagulls sailing over the water, little waves babbling at the quays, schools of curious fish looking for some crumbs to fall into the water, strolling passersby and a fisherman mending his colourful nets, little boats swinging softly on the heave, their splashing colours mirrored in the water, so often photographed as an abstract beautiful painting.

Skala Sykaminia, Molyvos, Gavathas, Skala Loutron, Plomari, Skala Mystegnon: those are just a few of the many little harbours we have on the island. Lesvos has more harbours than it has terraces at the sea, also more terraces than traditional little wooden boats, and more traditional boats than shipbuilders.

Europe, keen on getting the fish quota down, offers a subsidy for destroying these colourful little wooden fishing boats. As if they are the cause of overfishing! The sea has become so emptied of fish that local fishermen feel obliged to take that evil offer, just to survive.

Twenty years ago the Greek traditional fishing fleet consisted of 14,200 boats. Now there are some 2000 left. If these numbers concerned animals, they immediately would be added to the danger of extinction list. Who will protect the local Greek fishermen, the ship builders and their traditional boats?

When recently I was in Palios I saw some skeletons of wooden boats. They were not Greek. Turkey does not take this European subsidy, but they have their own way of getting rid of their old wooden boats. They sell them for a lot of money to smugglers, who put as many refugees as possible on the creaking boats and send them off to sea. Most of these boats do not survive the illegal landing on the rocky shores of Lesvos. Sometimes I have had to cry at seeing such a beautifully crafted boat, built with so much love, only to end up dying, without honour, as a smuggler’s tool.