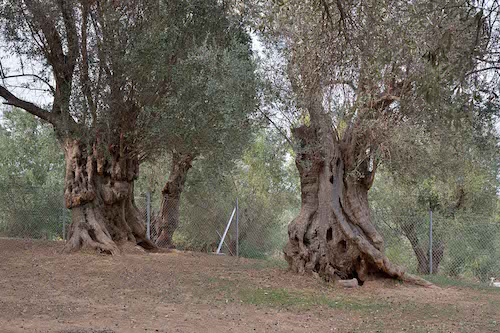 It’s only just now that I have the feeling that Lesvos is beginning to participate in the warming up of the earth. In previous years we have had long cold winters and not too hot summers. Last summer there wasn’t even a heat wave, for which Greek summers are so well known. August was actually a bit cool with a never-ending wind from the north, keeping the sea freezing cold in the northern parts of the island. Sensual Greek nights were hard to find.

Summer was obviously so happy at having been so cool, that she doesn’t want to go. It is only at night that the temperature descends below 20 degrees. People carry on having their daily swims in the lukewarm sea. Each wet and stormy front infesting south European countries fails to reach Lesvos and is directed elsewhere. Forecasters try hard to talk-up heavy showers for the island, but you see them just sail past Lesvos (except for some small stubborn clouds that bring just enough water that the plants, trees and snails do not have to complain).

This endless Indian summer does have some disadvantages. Insects these month are getting horribly old and they zoom along like it’s still mid summer. I even have pity with a lonesome, fat bumblebee looking desperately for some flowers with nectar. I see people, vampire-bait, going into combat with loud zooming bloodthirsty mosquitos. They end up with terrible red bites. Veteran mosquitos behave more aggressively than any summer mosquito.

Mosquitos are not the only stabbing beasts still going around. The olives are also getting terrorized by the notorious olive fly (Dacus oleaeor Bactrocera oleae), called here in Greece dacus. Last year this biggest enemy of the olive caused half of the harvest to miscarry. This year everyone looked forward to a plentiful harvest: so much fruit hung on the branches that they bowed cheerfully to the earth. The trees had a splendid winter with plenty of water and the dacus posed no danger. Until this extreme long late summer. Depending on the weather dacus can lay eggs three to five times in a season. This warm autumn gave them the opportunity to deposit a record number of offspring, endangering the quality of the olive harvest.

Dacus females try to deposit their eggs in an olive, which causes a mess that quickly reduces the quality. Most fruit will simply fall off the trees early and those still hanging with a deep hole produce poor quality oil (lamp oil they say) which brings far less money than a good quality oil. On Crete especially this autumn the dacus have so badly attacked the olives that no farmer will be expecting a fat wallet.

Of course there is talk about climate change. Even though I haven’t seen an increase in rain, wind or temperatures on the island, there are friends coming to Lesvos for tens of years, who keep on talking about the good old times – when many a winter day was like summer. I would conclude that Lesvos has not warmed-up but, on the contrary, become over the years more cold, which, in fact, also means climate change.

To me it seems that Lesvos is in a kind of climate-change-shelter. The only things the island suffers from is the refugee crises and a Europe that doesn’t care about the impoverished Greeks, nor about the refugees. That has nothing to do with climate change, but more with the dehumanization of society. In Holland discussions end up in serious fights about the black knight of Saint Nicolas, a children’s celebration. In Greece the hottest discussions are about what number of refugees the country can take care of. Hooligans and other far-right hot-headed screamers provoke masses of people into acting against refugees. On the mainland they cut the electricity supply to refugee camps, they organized a pig-barbeque next to a camp or try to prevent busses from transferring refugees from the islands to a new camp.

The group of active anti-refugees on Lesvos is relatively small. On the contrary you see more and more upcoming initiatives to give the refugees a more humane life, while they have to wait endlessly in bad conditions to be able to be registered. It might be that perky Lesvos is just not that interested in climate change nor does it subscribe to the dehumanization of society.