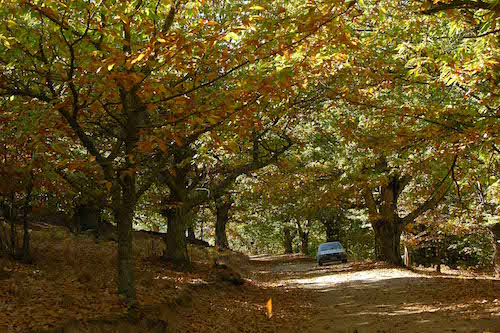 What is a Zeus acorn, a Sardic nut, a Pontic nut or a Sinope nut? These are all names, found in old documents, for the sweet chestnut (Castanea sativa). When looking through the history of this autumn nut, lots of different names were found, but I’m not entirely sure if they all concern the sweet chestnut. Everybody who knows the thorny husk where the chestnuts hide, would never call that a woolly fruit, like Mota, meaning ‘woolly’. Or Lopima, another name for the chestnut, meaning ‘easy to peel’. Well, if there is one fruit that can drive you crazy while peeling, it is the chestnut. I love chestnut puree, but then you need lots of patience and a whole day to peel a bowl of chestnuts.

In an earlier column from 2011 (Sardian nuts) I wrote that Alexander the Great introduced the sweet chestnuts to Greece. But since reading and understanding the paper Cultivation of Castenea Sativa in Europe*,I have found that long before Alexander the Great even was born, sweet chestnut trees were blooming in Greece. The writers of this scientific paper have researched ancient Greek books where chestnuts were named, even if they found a whole lot of different local names. Happily enough Theophrastus named the fruit by its known name, so there is no confusion. Because another problem is that in ancient times all fruit with a hard skin was named a nut, making it difficult to find out where, when and for what chestnuts were used: the text could just as well be about a hazel, walnut or an acorn tree. Before Theophrastus, Herodotes and Hippocatres had already named the chestnut; after them many more followed.

By then we are in a historical period that is much easier to research. Then you had for example Magna Graecia (Great Greece) that started in the eighth to sixth centuries BC, when Greek states blew their hot breath over the coasts of the south of Italy and Sicily, until the Romans ended that colonization. Syracuse and Neapolis (later Naples) were the most important colonist cities. I now do understand why, in those ancient times, lots of Greeks traveled to Italy: it is known that Sappho for example lived for a few years in Syracuse as a refugee or an exile. And the great philosopher Pythagoras fled Samos from the dictator Polycrates around 530 BC and settled in the South-Italian city of Croton.

Maybe one day it will be known when the chestnut trees appeared above Agiasos, but who brought the first chestnut tree to Lesvos will be difficult to find out.

The mountain village Agiasos is number one in celebrations on Lesvos. At the end of the winter it is a champion in organizing a sizzling carnival with colourful and humorous events. Around August 15th the thousands of pilgrims offering wishes (or a thank you’s) to the Holy Virgin at their famous Maria-church are welcomed with lots of music, food and drinks. Finally, during the first weekend of November, this little town will celebrate the popular chestnut festival, which, for weeks already, they have been collecting chestnuts in the woods. In the coming days the perfume of roasted chestnuts will whirl through the small picturesque streets, the squares will fill with lots of visitors and the booze will stream abundantly.

Nowadays most vegetables and fruit that are at the base of the Greek food have been spread all over the world: olives, figs, walnuts, grapes: you will find them as far as in California, an American state that imported nearly everything from the old world.

Greece nowadays has its umpteenth emigration crisis, if only this one does not go to Italy. The last emigration wave was in the 60’s-70’s, when most emigrants departed with everything they owned in one suitcase. Nowadays it’s young people who have finished their studies and export their knowledge. This will be a big loss for Greece, who will need decennia to repair the damage Europe has caused.

There is also knowledge flowing into the country; its coming in with the refugees, who, however, do not want to settle into a poor country. And so Greece, once a proud country, with lots of booming commercial cities as far away as in Italy, now again sees its country impoverished. They no longer have anything to give other than great holiday experiences, like the entertaining Chestnut Festival in Agiasos. But that takes place just when most of the tourists have gone.