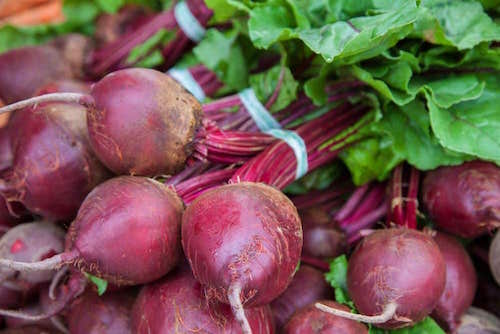 Not many people will associate beetroots with the exotic hanging gardens of Babylon, where, according to the Assyrian, they grew. I thought beetroots were a winter vegetable, the main ingredient for Russian borscht consumed when it is freezing cold outside. Certainly beetroot is one of the few ancient Greek vegetables left in the modern Greek spring and autumn kitchen. When cucumbers, tomatoes, aubergines and zucchini grew only in faraway countries like India and South America, along the Greeks coasts the leaves of sea beetroot (Beta vulgaris maritima) was harvested, (a plant used to be called teutlon in Greece). They’re still around along the coasts, though only collected by some specialized chorta seekers. The sea beetroot is the primal mother of the red beetroot, sugar beet, chard and fodder beet.

The history of beetroot consumption starts with its leaves. The bulbous roots underneath were only used for medicinal and as a food for gods (they were offered in Delphi to the god Apollo). The story goes that in those times beets were worth their weight in silver. In 1975 beetroots were promoted as space food and again offered to Apollo. To celebrate the connection of their space vehicles, Russian astronauts in the Sojuz-spaceshuttle served borscht to the visiting American spacemen from the Apollo mission. A party with flying beetroot soup!

Gourmands of the Roman Empire didn’t know anything about rocket science, but they felt themselves to be gods – arguing that the Greek offering of beetroots was a waste of food. They were the first to come up with recipes for beetroots to make bright red drinks, sauces and salads, like Apicius in his De re coquinaria, one of the oldest preserved cookbooks from the first century. They followed Aphrodite, who ate beetroots to stimulate lust. Whorehouses were decorated with images of these aphrodisiacs, like the brothel dug up from the ashes in Pompeii. And it was believed that when a man and woman ate from the same beetroot, they would fall in love with each other. If life could be that simple!

Despite this folklore, beetroots are not that popular these days, let alone the beetroot leaves. When you buy beetroots in Greece you get some bulbs attached to an entire shrubbery. Many foreign tourist looks dazed, having ordered beetroots and getting a plate with a few pieces of beetroot alongside a whole string of spinach-like greenery. I myself wasn’t that keen on this dish and wrongly spurned these tasty leaves. I have just now discovered how many tasty dishes you can make with beetroot greens, like a pasta sauce or a pizza.

You treat the crispy fresh beetroot leaves like spinach: you have them wilted in a splash of olive oil. I like the leaves torn in little pieces first. You can also enhance them with some garlic and herbs such as mustard seeds and cumin. With the help of some cream you can make this into a fancy sauce for pasta. A pizza, coated with some tomato sauce, then covered with some beetroot leaves, sardines, thin sliced onion rings, along with some grated cheese is another delicacy.

If the leaves are too old, then stick with the bulbs. These can be washed and put into water unpeeled. After having been cooked for about 20 – 30 minutes, with just one finger you can rub off the skin. The cooking water is an excellent remedy for a hangover, so don’t throw it away when you serve borscht and vodka. I bet vodka also goes well with a beetroot salad with roquefort cheese, resting in a spicy French vinaigrette, or a beetroot, hard-boiled-egg and avocado salad seasoned with a mayonaise-yoghurt-curry dressing.

Be aware: when going to work in your kitchen with beetroots and vodka, it’s best to dress up like a doctor treating a corona patient. Cover up completely against the splashing red beetroot juice, that during Victorian times was used as hair dye and is nearly impossible to remove from your clothes. In times of a heat wave your option could be to leave all clothes off, just a bathing suit or underwear will do, provided that they are black so the red splashes cannot be seen. Gloves are not mandatory, because eventually you can explain your red fingers to your guests, by serving them an exquisite beetroot dish.