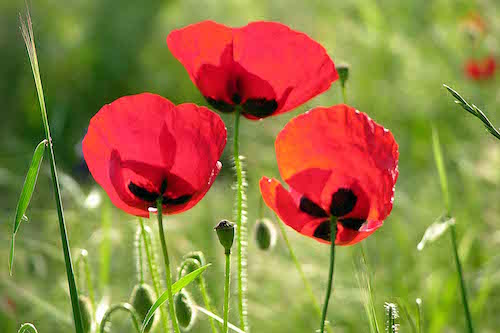 “When thunder clouds appear, quickly burn your thunder flowers”* I won’t follow this old saying, because I want those thunder clouds to give rain. I study the cloudy sky and search for any cauliflower forms. Dark masses of tiny water parts hang around the mountain tops, but will they release that much wanted water from heaven? The sun still knows where to find the cracks and keeps on shining.

The island is pretty dry. The oceans of flowers have started to wither, making orchid hunters desperate: where to see those orchids for which they have flown especially to Lesvos? They will now have to do with the thunder flowers, who shamelessly and dazzlingly have gathered in masses and shine as red as any tulip field in Holland. Thunder flowers do not care about water or good soil: they flourish in poor and churned soil. This way they survived the battlefields of the First World War.

It was the Goddess of the Earth, Demeter, who created this sleeping flower*. She preferred to sleep throughout the six months of the year that her daughter Persephone had to spend with Hades in the Underworld. The God of Sleep Hypnos and his son Morpheus also used this flower to close their eyes and to dream. The sleeping flower has remained along with its derivatives, like opium, a symbol for sleep, and to help people have sweet dreams or lead them to damnation. When, like Alice in Wonderland, you pass through a field full of sleeping flowers, you’d better not lay down in that bright red world: you might risk an eternal sleep.

Sorcerers loved these witch flowers*, because they had so many properties to make healing concoctions. Their medical applications are many: used not only to have a good sleep, but also to fight a sore throat or cramps. And their tiny moon blue seeds, known from the tasty German or Swiss rolls, contain rare minerals and vitamins.

Had the soldiers in the First World War known this, they would have all become addicted to the witch flower. There were so many. Especially in Flanders, the poppies spurted out of the bomb and grenade-churned battlefields and thus became symbol for the lugubrious battle that took place there. Thanks to a poem about those blood red papavers (John McCrae: In Flanders Fields), many a veteran now wears a red poppy. Be aware: no real ones. As soon as you pick a poppy, its fragile petals become as free as a bird and whirl in all directions.

If you still intent on gathering poppies, take note: in England they believed that when you picked them, you could cause a thunderburst. While in Belgium, they believed that when you burned thunder flowers, you could shoo away those nasty thunderstorms. In fact, the real flower closes its petals when the rumbling begins and the Heavens threaten to weep.

While I watch intently to see if the poppies are going to close their flowers or not, I pick some petals. I read somewhere that children used to lay a folded poppy petal on their hand and when they slapped it, it gave a loud clapping sound. The only sound I heard was that of skin to skin. I probably need more exercise. It is said that the Dutch name for a Poppy, klaproos (literally translated as clap rose), comes from this children’s game. Other say the name klaproos comes from the Poppies’ rattling seed pods.

Lesvos should rattle its clouds more often so that the plants, especially the olive trees, get enough to drink. Otherwise the island will get, besides the economic problem that has been enlarged by the absence of a large percentage of the tourists, a new problem. The poppies can shine as brightly as they want, but if the island doesn’t get serious showers or as many tourists as there are poppies in the fields, I am afraid that many an islander is going to need sleeping flowers in order to rest at night.

*(In Holland there are different synonyms for a Poppy (klaproos), like donderbloem (thunder flower), slaapbol (sleeping flower) and kollenbloem (witch flower).