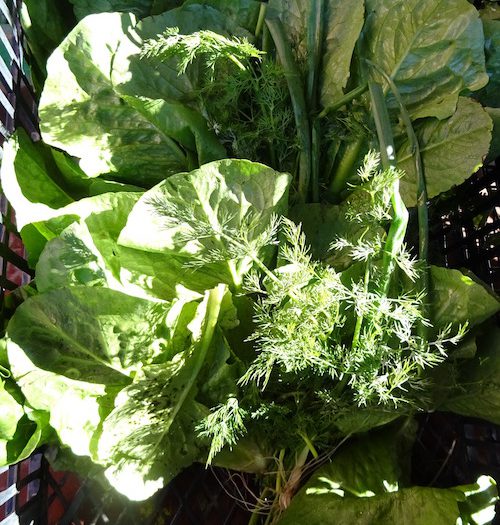 The flagship of the Greek kitchen is the summer salad choriatiki, composed of fruity tomatoes, fresh cucumber, bitter sweet paprika, piquant onion rings, salty olives and creamy feta. Nothing needs to be added — not even to the dressing: a steady slug of olive oil, some vinegar, salt and oregano. The secret of the choriatiki lies on the bottom of the salad bowl: the oil mixed with the spicy tomato juice is a perfect sauce to dip up with bread.

In the winter Greek gardens fill with cabbages, leek, carrots and marouli (lettuce), vegetables to make plenty of different salads with, but where the splashes of olive oil and vinegar might need some reinforcement.

It is a bit odd that the word salad is derived from salt: sal. In ancient times Greeks not only ate salted fish but also raw vegetables seasoned with vinegar, oil and salt. Hippocrates proposed eating raw vegetables before the heavier dishes reached the table. That would be good for the digestion. Wine lovers however are convinced that the vinegar harms the taste of the wine and it would be better to eat these ‘salted’ vegetables at the end of a dinner. I just drink some ouzo with a salad, the best drink to go along with ‘salted’ dishes.

In the beginning salad was raw vegetables. Along the centuries other ingredients were added especially in restaurants. In the early 50’s, on a Sunday morning, chef Caesar Cardini was worried looking around his kitchen at Ceasar’s Palace in Tijuana, Mexico. A group of hungry tourists had just arrived but all that was left were some green salads, eggs, Italian cheese, lemons, old bread and some olive oil spiced with garlic. He decided to create something new: he placed torn salad leaves in a bowl and filled it up with roasted bread cut in croutons, coddled eggs and sliced cheese, he added some lemon, salt and other spices to the olive oil which he poured over the salad. He instructed the waiters to make a show of mixing the ingredients of the salad just under the noses of the clients. This is how the ceasar salad was born. The anchovies were added years later.

Nowadays the Greeks add many cold dishes to their list of salads, like tzatziki, taramo (roe), melitzana (aubergine) – and beetroot salad. And mayonnaise has sneaked into the Greek salad world: regularly lazy cooks have their crab, chicken and Russian salads swim in this fat white sauce.

In Paris I became familiar with vinaigrette. A French friend knew perfectly how to make it fresh and spicy. Even when I used the same spoon to measure and the same ingredients she used, I never managed to make this perfect dressing. But now I feel that I have finally master this French sauce and I regularly fill a jam jar with it, so that I always have a vinaigrette ready: fill ¼ of a jam jar with vinegar. Add: 1 tsp of runny honey, pepper, salt and mustard, plus 1 garlic glove crushed. Nearly double the volume with olive oil. Shake everything (if you want your kitchen to remain clean, make sure that the lid is on). Add to taste some more sugar, salt, oil or vinegar.

For a carrot salad replace a part of the vinegar with the juice of 1 orange and add another 4 crushed garlic gloves, ½ tsp thyme and ½ tsp rosemary. The vinaigrette is usually poured over a salad just before serving, but grated carrots and raisins love to marinate some hours in a vinaigrette. Before serving sprinkle the carrots with pieces of walnut and crumbled feta.

The word salad refers to green leaf salad. When I was a child and my mother served green salad, my father grimaced and whispered: rabbit food! That memory never kept me from eating salads. Unless with a good dressing, I love to eat all kinds of salads. Ocassionally you may find different kinds of leaf salad on the island, but I am happy with marouli. Enrich it with hard boiled eggs, corn, pickles, onion rings, roasted cubes of bread, small marinated mushrooms, bacon and blue cheese. You can mix marouli with so many things.

You also can mix marouli (torn in small pieces) into a hot potato puree, with pieces of black olives and walnut, salt and pepper. But that stew is no longer called a salad.

And there is the roka (arugula) salad with balsamic syrup decorated with thin slices of Parmesan and capers. That sounds pretty Italian, but roka has been eaten in Greece since ancient times. The old Greeks even thought roka aroused sexual lust. Until in the middle ages eating roka was forbidden in the monasteries. When you mix roka with green leaf salad, the lust effect will disappear. When you are seeking the aphrodisiac effect, you can enlarge a roka salad with avocados, boiled eggs, onion rings, pieces of figs or dates and replace the Parmasan with the Greek myzithra (hard, spicy cheese).

When the green salad has wilted (green leaf salad and roka can be kept fresh for days in a bottom of water) you always can make a leek-avocado salad: cut 1 leek in rings, 2 avocados and 2 hardboiled eggs in slices, half parts of 1 orange and some dried figs cut in four. For the dressing: 1½ tbsp mayonnaise, 1½ tbsp yoghurt, 1 tsp honey, ½ tsp curry powder and pepper. Mix all ingredients and sprinkle with pieces of walnut.