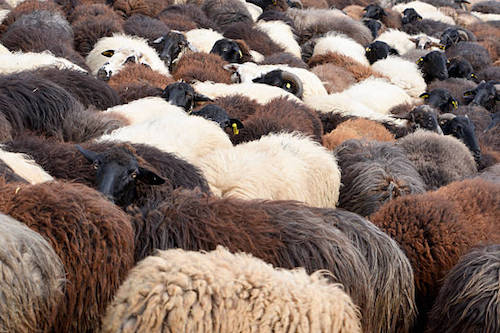 In May for the first time I had my semi-longhaired dog shaved. Other years he unhappily made it through the warm summers, always on the brink of fainting. Now he hops around, as happy as a newborn lamb. Some people say that shaving dogs is unhealthy for them, because their fur is a natural sun protector. My dog thinks otherwise: he now loves sunbathing, not bothered by anything.

It is not because of the heat that sheep are shaved, although I can imagine that wearing a coat of several centimeters of pure wool in the hot sun is no fun. Their coats will be cut because of the sheer weight of it: a sheep bearing meters of wool can just fall over because of the number of kilo’s he or she has to carry and risks not being able to get up again. Other reasons are hygienic: shaving can prevent illnesses.

In earlier times sheep might have been shaved for their wool. It was a necessary substance to make cloths and tapestry. Before cheaper synthetic fabrics flooded the markets, lots of women were behind a spinning wheel or a loom instead of in front of the television. Even Irene of Athens, Empress of the Byzantine Empire from 797 to 802, had to spin wool when she was banned to the island of Lesvos, where she spent the last year of her life behind a loom.

Lesvos has never been a wool-island. In the times that the Romans commanded half the world, Lesvos was famous for its wines. Centuries later, around 1900, the island had its Golden Age thanks to commerce in olive oil and soap. Between the olive trees there were fields full of tobacco and corn. These were the years that ouzo was born out of tsipouro, a much older anise drink. On the shores ship yards prospered and until the mid 20th century resin was harvested from the many pine tree woods.

The island now still has a name for great olive oil and the best ouzo. But there are new products to be proud of: visiting a fish shop in Athens with a choice of sardines, the fat ones from the Gulf of Kalloni and those of Gera are the most praised. In the cheese shop you can find a fine choice of cheeses from Lesvos that are the best of their kind: ladotiri, gravièra and myzithra. And Lesvos is the only island that is allowed to produce a cheese named feta. The other regions of this nowadays exclusive Greek cheese are Macedonia, Thrace, Peloponnesos and Epirus.

Thanks to many subsidies the island of Lesvos is full of sheep and goats. You will even find them on the roads and always in the distance you may hear a jingling sheep. In the most deserted places you might run into a sheep or goat farm, if that’s what you can call those derelict buildings constructed from drift wood, old bed springs and other debris. But that still doesn’t make Lesvos a wool producing island.

Lesvos may have many more sheep than it has inhabitants, but apart from their milk and sometimes a lamb roasted above a fire, these animals are not well utilized. The island never knew a tapestry industry. In the Sixties they weaved a bit, but made rugs with leftover fabrics. Those merry striped, so called ragrugs did not contain any wool. The bi-products of the shaved sheep were only to be found in the illegal dumping places.

The island has no idea what riches it has: hot springs that are for the most part closed, beaches containing tons of seaweed and truckloads of wool given back to Mother Nature.

Something has changed since last year. A Turkish enterprise came to take the wool of Lesvos. Maybe it is a smart company that profits from the new hype of knitting with fancy wools (knitting is said to be the new yoga). Or it is a building company, active in the building fury that rages through Turkey these days, that badly needs insulation material: wool mutes sounds, regulates the humidity in the air, protects against cold and heat and is not particularly inflammable

There is no building fever on this island, nor has it many new enterprises. However I am happy that the farmers now gather the wool in big white bags, which are waiting at collection points along the main roads for the Turks to come and collect. A lot better than dumping it secretly along a deserted dirt road.