Fire on the island* 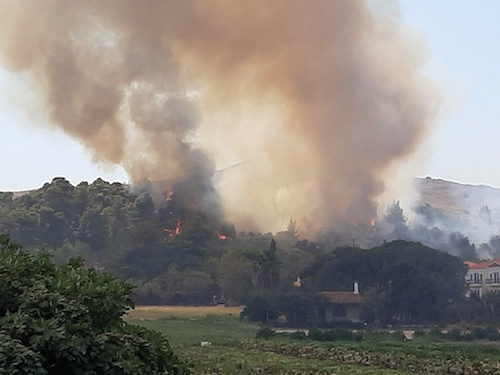 My worst nightmare came true on August 1st 2020: a wildfire invaded my backyard. The cause: probably a farmer and his spark-spitting tractor that were happily mowing a nearby olive field. Sparks that became flames. The first hungry flames attacked the super dry grass and then the wind took them for a walk. A wind clearly wanting to come my way. With great effort ten fire trucks, two fire planes, one fire helicopter and lots of citizens put a stop to the fire.

Especially during the hot summers I am afraid of wildfires. No way in August will I enter a large forest, seeing plumes of smoke sets my heart racing, smelling a barbecue makes my nose turn in all directions to see where the fire is. But when there are wildfires on Lesvos, their flames are usually far away, like some weeks ago, the big fire near Thermi. But not this time.

This is not the first burn for the field where it began. Years ago when an arsonist plagued the environs of Molyvos, the only fire in Eftalou was on that field, and it was put out pretty quickly. The arsonist set the fires mainly around the road to Vafios. He or she got caught. As happens in many villages, for strangers it is difficult to get to know who actually was the culprit. The American writer Timothy Jay Smith, who every year stays for several weeks on the island, has written a newly published thriller around that case: Fire on the island*.

Last year, after the disastrous fires in Mati (Attica, on the mainland), my fire phobia made me write a list of what to take, should I have to flee the flames. You should pin that list permanently on your front door, because when panic strikes, there’s little clear thinking.

After handing over my computer to my neighbours, I thought I’d better wet the backyard. As really close flames were already shooting high into the sky, I watered the bushes with a garden hose, which was of little use so I decided to use the water to wet the house. Shortly after I decided to save some things from the house. But once inside the house I had no idea what to take and thought it more important to water the house again. A garden hose seems useless when a wall of flames is approaching, so for a third time I went into the house, where I saw my handbag, containing all my papers. Oops, I nearly forgot. I ran out of the house to continue hosing the back of the house. When flames finally embraced a tree, whose branches usually give a friendly tickle to the window of the bedroom, I gave up the battle and the house. Meanwhile lots of people arrived. I handed them the garden hose and prepared for leaving a not yet burning house.

Dog Bowie immediately jumped into the car and was brought to the sea. The eighteen years old Albino is a street dog, who for a few years now has considered my house as his home. Even though he became a pet (meaning that all he wants is to sleep for the whole day inside the house) he refuses to go into a car. He always does what he wants, does not obey orders and now he is completely deaf. I have taught him sign language, that he seems to understand a little. But there is no way that you can put him on a leash. King Albino is his own boss and was clearly not in the mood for a walk or doing some steps. He didn’t show any sign of panic because of the thick smoke now hanging over the garden and the rain of sparks started in earnest. He wanted to get into the house, out of which I had just dragged him. Yes, he was a bit suspicious because I carried a dog leash and he left me no option other than to put it on. Then he panicked and started biting, furiously squirming, still refusing to move forwards. When blood started dripping out of his mouth because of his biting the leash, I removed the leash and started walking towards the sea, as firetrucks at high speed passed me on the way to the house. I gave up on Albino.

The field in front of the house finally filled up with people helping to put out the fire. Safe at the sea, I saw flames creeping tower-high into pine and olive trees. I couldn’t bear to look at this disaster for long and went to a friend in the village, who put wet towels all over me, giving me water, lots of water, so much water that I ended up under the garden hose to extinguish my shock.

After a while, by which time I really thought the house was gone, I heard that the house was saved. I couldn’t believe it. And that Albino was waiting at the front door, whining, until they let him in. In contrast to some of the cats and me, he had no rapid heartbeats nor shaky legs.

Some of the landscape has been torched, but most important is that the house still stands and this beautiful place to live has not been lost. With such a fire you realize how transitory life is and what little you really need to live. Living in Eftalou is a huge privilege.

My worst nightmare did not entirely come truth, because I never felt myself to be threatened by the fire. I mostly learned from it: I’ve seen how fast flames can travel, but especially that people in the neighbourhood and friends are even faster to come and help. They were the first to try to stop the fire, and in doing so have saved the hotel next door. Then came the fire brigade (from Kalloni and Mytilini), with their water canons truly worthy adversaries for the fire. Then came the helicopter that finished the partying flames.

Again I want to thank everybody, fire fighters as well as all the many others, for coming out and saving the house, the hotel and stop the fire. Thousands of thanks! Χίλια ευχαριστώ!

*The title comes from Timothy Jay Smith’s Fire on the island, published by Arcade Crimewise, ISBN 1950691608